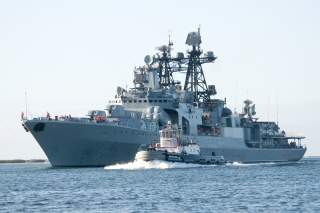 The Vice Chief of Naval Operations told the force there needs to be an intense and concentrated effort to speed up weapons and technology acquisition for the specific purpose of countering massive military gains by both Russia and China.

“We need to scale up in a wildly unpredictable environment, as we see the reemergence of true existential threats. We face a new era of great power competition,” Vice Adm. Bill Moran, Vice Chief of Naval Operations, told an audience at the annual Navy League Sea Air Space Symposium.

Moran emphasized that although threats like Iran and North Korea are still quite relevant, major power competition – with rivals such as China and Russia - needs to take center stage as the Navy seeks to both expand in size and sustain a technological advantage.

“We need to act with a sense of urgency,” Moran stressed.

In the context of talking about urgency, Moran specified fleet growth and “agile” acquisition; he said the service was on a “good vector” to reach its goal of 355 ships.

He also made the point that the Navy must further accelerate rapid acquisition with quick integration of new technologies on existing platforms as well as fast-tracked innovation to stay in front of adversaries.

“We cannot afford to play cat and mouse games with contracting requirements,” Moran told the audience.

Among many things, these kinds of Pentagon efforts tend to involve terms we often hear in the weapons development world such as “open architecture,” “common standards” and rapid integration of fast-evolving commercial sector innovations.

The Navy has been trying to move quickly with AI in recent years; among other things fast-evolving AI technology relies upon new methods of collecting, organizing and analyzing vast amounts of combat-relevant data. Algorithms are increasingly able to access vast data bases of historical data and combat-relevant information to inform decisions in real time.

CANES is able to gather and securely transmit data from various domains and enclaves, including secret and unclassified networks.

CANES is being installed on carriers, amphibious assault ships, destroyers and submarines, and the service has completed at least 50 CANES systems and has more in production, Navy developers told Warrior.

Upgraded CANES, which relies upon hardened cyber and IT connectivity along with radio and other communications technologies, is being specifically configured to increase automation - and perform more and more analytical functions without needing human intervention, Navy developers say.

Surface ships such as the Littoral Combat Ship, rely upon a host of interwoven technologies intended to share key data in real time - such as threat and targeting information, radar signal processing and fire control systems.

CANES connectivity, and AI-informed analysis, can be fundamental to the operation of these systems, which often rely upon fast interpretation of sensor, targeting or ISR data to inform potentially lethal decisions.

The LCS, in particular, draws upon interconnected surface and anti-submarine “mission packages” engineered to use a host of ship systems in coordination with one another. These include ship-mounted guns and missiles along with helicopters, drones such as the Fire Scout and various sonar systems - the kinds of things potentially enhanced by AI analysis.

While Moran stopped well short of citing specific Russian and Chinese weapons systems, he did say that each of these potential adversaries are increasing in size and fielding new high-tech weapons at an alarming rate.

“We dominated technology after WWII. We dominated the maritime domain after fall of Berlin wall. We dominated innovation throughout the 20th century. We cannot cede space to authoritarian competitors. We have to be ready to win the peace again,” Moran said.

Also, it goes without saying that both Russia and China have 5th-gen stealth fighters, advanced ground weapons, nuclear weapons and anti-satellite weapons – all of which are potential threats to the US Navy. Alongside these efforts, both China and Russia are making rapid progress with expanding their respective naval forces and high-tech weapons.

A 2014 U.S.-China Economic and Security Review Commission released an open-source expert assessment of Chinese military progress; the review contained a 70-page chapter on Chinese military modernization. (Although the report is from a few years ago, it offers one of the most comprehensive and available assessments, which is still of great news relevance).

China has plans to grow its navy to 351 ships by 2020 as the Chinese continue to develop their military’s ability to strike global targets, according to the Congressional report.

These include the LUYANG III, a new class of Chinese destroyer. These ships are being engineered with vertically-launched, long-range anti-ship cruise missiles, the commission said. The new destroyer will carry an extended-range variant of the HHQ-9 surface-to-air missile, among other weapons, the report says.

The Chinese are also developing a new, carrier-based fighter aircraft called the J-15.

On the overall Naval front, a report in recent years from Globalfirepower.com has assessed the Russian Navy as having 352 ships, including one aircraft carrier, 13 destroyers and 63 submarines. The Black Sea is a strategically significant area for Russia in terms of economic and geopolitical considerations as it helps ensure access to the Mediterranean.

"AIP (battery power) is usually implemented as an auxiliary source, with the traditional diesel engine handling surface propulsion. Conventional submarines running on AIP are virtually silent. Unlike nuclear boats, they don’t have to pump coolant, generating detectable noise. It makes them highly effective in coastal operations and areas where enemy operates many anti-submarine warfare (ASW) assets," according to a report from the Strategic Culture Foundation

The AIP or anaerobic technology allows to operate without access to atmospheric oxygen (by surfacing or using a snorkel), the report says.