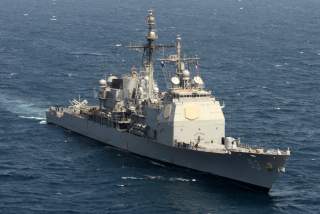 U.S. Navy warships are getting a significant boost in electronic warfare capability that should help protect those vessels from missile attack. Engineers at the Navy’s Naval Surface Warfare Center - Crane Division are upgrading the AN/SLQ-32 electronic warfare (EW) system, which was originally introduced in the 1970s, to the current state of the art.

“The primary mission of the Surface EW System is Anti-Ship Missile Defense, which is all about the protection of the ships,” Bryan Fox, NSWC Crane’s AN/SLQ-32(V)6 In-Service Engineering Agent Manager, said in a statement. “These installations take Electronic Warfare to the 21st Century. We are giving the Warfighter game-changing technologies so that current and future threats can be combated. This type of capability has not been seen in Surface EW in over three decades.”

According to Naval Sea Systems Command (NAVSEA), the Navy established the Surface Electronic Warfare Improvement Program (SEWIP) in 2002 to incrementally upgrade the AN/SLQ-32(V). Over the years, the program has continued to field evermore-capable electronic warfare systems to defend the fleet against increasingly more capable threats such as new Russian and Chinese cruise missiles such as the P-800 Oniks or YJ-18.

The newest upgrade of the system—at the core of which lies the Lockheed Martin AN/SLQ-32(V)6—is one of the most significant modernizations of the system to date. “SEWIP Block 2 provides an enhanced Electronic Support (ES) capability by means of an upgraded ES antenna, ES receiver, and an open combat system interface for the AN/SLQ-32,” NSWC Crane Corporate Communications said in a statement. “These upgrades are necessary in order to keep pace with the threat and improve detection and accuracy capabilities of the AN/SLQ-32.”

The Navy did not say how many ships have received the upgraded electronic warfare systems, but the AN/ALQ-32 is found on the vast majority of the service’s surface combatants including the Ticonderoga-class cruiser, Arleigh Burke-class destroyer and the Littoral Combat Ship. That means eventually all 22 Ticonderoga-class ships, 65 Arleigh Burke-class ships and the eventually all 30 Littoral Combat Ships—once they are completed—could receive the system. It is also likely future Flight III DDG-51 destroyers that are under construction will receive the new EW system.

“The NSWC Crane team has done a fantastic job installing the U.S. Navy's greatest Electronic Warfare improvement in decades,” Steve Showalter, a representative from the Program Executive Office for Integrated Warfare Systems, said. “Without the NSWC Crane team’s dedication, the Fleet would not be able to take full advantage of these game-changing Electronic Warfare systems.”

Given the renewed focus on great power conflict, the demand for electronic warfare systems to counter advanced enemy weapons will only increase as time goes on.