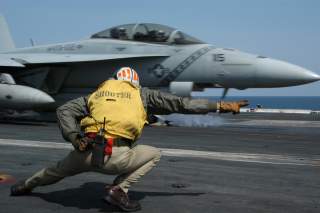 United States Navy experiments are proving that advanced airborne data-links will greatly improve the capability of the service’s carrier-based strike fighters and electronic attack jets even without the addition of new platforms.

The operational Navy will adopt the new capabilities over time—over the course of several software upgrades for the F/A-18E/F and EA-18G—as it struggles to maintain its lead over rival great powers such as Russia and China. “This allows pilots to see the entire battle space by sharing their own aircraft’s sensor-developed tracks with tracks from other aircraft, developing a more complete air picture and improving overall situational awareness,” reads a release from the Naval Air Systems Command’s F/A-18 and EA-18G program office. “The CTP also enhances targeting capabilities, improving overall timelines and performance in the air-to-air threat environment.”

While the F/A-18E/F fleet will receive many of these upgrades to help keep them at the top of their game, the most impressive new capabilities will go to the Growler electronic attack aircraft community. The Super Hornet derived airborne jamming platform will the center piece of the Navy’s Network-Centric Collaborative Targeting (NCCT) efforts, which is designed to help the carrier air wing to defeat advanced surface-to-air missile threats such as the Russian-made S-400.

Like the other efforts in the NS17 experiment, the key enabler of the NCCT is the powerful TTNT data-link, which has many times the bandwidth and range of the traditional Link-16 network. “The program is speeding the cueing of sensors and targeting through the use of joint data standards and interfaces enhance kill chain effectiveness. (A kill chain is the sequence of actions from detecting a target to engaging it in attack.),” the Navy statement reads. “Multi-sensor geolocation events were supported by all sensor nodes in the network and enabled by ‘fusion forward,’ with NCCT fusion engines located onboard U.S. ships for the first time.”

In many ways, the entire point of the NS17 fleet experiment was to seamlessly network sensors over the TTNT to all of the Navy’s ship and aircraft. The Navy’s long-term plan is for every ship, submarine and the aircraft to network to be part of a coherent whole. Every shooter will be a sensor and vice versa—as now retired Vice Adm. Mike Manazir described a few years ago. It is only now that vision is coming to fruition.