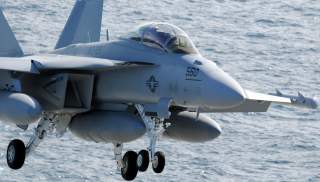 The next increments of the U.S. Navy’s Next Generation Jammer (NGJ) will have little in common with the Raytheon-built AN/ALQ-249 Increment 1 pod that is currently under development for the Boeing EA-18G Growler. The frequency bands those follow-on pods will have to operate in necessitates an almost completely new design for those jammers.

“We don’t anticipate any significant amount of common hardware due to the significantly different frequencies we’re dealing with and the location of the pod on the aircraft and, again, mutual interference effects,” Vice Adm. Paul Grosklags, commander of the Naval Air Systems Command (NAVAIR) told the House Armed Services committee on June 7.

The U.S. Navy has requested roughly $2 billion to develop the next increment of the NGJ pod in the fiscal year 2018 budget. NGJ Increment 2—which is likely to be fielded in the late 2020s—will be designed to jam low-frequency early warning radars operating in the UHF and VHF bands. Those low frequency early-warning radars can detect and track fighter-sized stealth aircraft, but do not provide the resolution needed to guide a missile onto a target.

Increment 3 of the NGJ will focus on the high-bands (the top part of the S-band, C-band, X and Ku-bands) that are used for fire-control radars. Fire-control radars such as the AN/APG-77(v)1 on the U.S. Air Force’s F-22 Raptor or the AN/SPQ-9B on the U.S. Navy’s Ticonderoga-class Aegis missile cruisers operate on the X-band. Other similar systems can operate on frequency bands ranging from top part of the S-band to the C-band through to the X and Ku-bands. However, the X-band tends to be favored by a lot of designers.

Meanwhile, the current Increment 1 jammer—the AN/ALQ-249—is proceeding on course and has in fact been accelerated through its various developmental milestones. According to Grosklags, the new pod, which recently hit Milestone B—entering into engineering and manufacturing development—should enter low-rate initial production–or Milestone C—in 2019. It should be ready for fielding with the Navy’s operational EA-18G squadrons in 2021.

One of the reasons that the Navy has been able to move relatively quickly with the NGJ program is because former Pentagon acquisitions secretary Frank Kendall fast tracked the program. As such, Grosklags noted that the Navy does not have the usual tedious oversight burden on the NGJ as it would on other major programs.

Indeed, the Navy would like to further accelerate the NGJ—the new electronic attack pods are vital to keeping the carrier air wing effective against new Russian and Chinese air defenses—but there are technical developments that the service must work through before that can happen. One of the problems, Grosklags noted, is the sheer radiated-power of the new Gallium Nitride-based active electronically scanned array antennas on the ALQ-249.

“There are some things we need to work through, particularly with the amount of radiated power we’re trying to get out of that pod and the effect it has on the rest of the aircraft’s systems when it is radiating,” Grosklags said. “We plan to start flight test in late ’18, early ’19, and then we’ll get a full-up evaluation of those interference effects.”

Grosklags noted that the problem is not an insurmountable one. Electromagnetic interference is a common problem for all sorts of radio-electronic hardware.

The NGJ is a particularly important program and there is a lot of pressure to get the new jammer out to the fleet as soon as possible—especially as advanced air defense such as the Russian-made S-400 proliferates around the world.