The Navy Isn’t Giving up on Its Deadly Railgun Yet 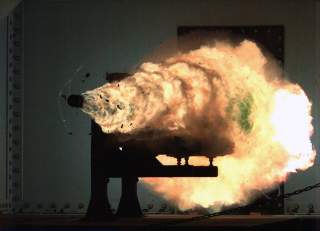 Eyebrows rose in US defense circles earlier this month when an anonymous Twitter user posted photographs of a cannon on a Chinese Navy ship that appears to be a prototype for an electromagnetically-fired railgun.

Images of the out-sized gun on the Haiyang Shan, a Type 072 tank landing craft, at the Wuchang Shipyard, suggested that China is overtaking the US in perfecting a game-changing naval weapon that can hurl non-explosive projectiles at more than seven times the speed of sound.

Evidence of the suspected Chinese breakthrough followed a flurry of reports in December that the US is abandoning its efforts to develop a similar railgun that can be deployed on warships after spending a decade and more than US$500 million on the bid. One reported sticking point is the railgun’s onerous testing requirements, which have delayed deploying the weapon aboard navy ships.

But military researcher Joseph Trevithick reports that the US Navy is far from dropping its efforts to develop the new weapon and is preparing to pour millions more into the project in the 2019 fiscal year. The money is part of the Pentagon’s FY 2019 budget request, which calls for US$686.1 billion in spending for the army, navy, air force and military agencies.

Trevithick noted in a February 14 article for The War Zone, a Time Inc. defense website, that the Navy has allotted nearly US$45.8 million for R&D for both electromagnetic and directed energy weapons in the upcoming funding cycle, demonstrating that the project is very much alive.

“The railgun is very clearly in the budget… and there’s no reason to believe that it will not continue,” Trevithick told Asia Times.

Trevithick, a defense writer and senior fellow at globalsecurity.org, notes that cash is also being tapped to develop solid-state laser weapons and to fund a joint program with the US Air Force to build a high-powered radio frequency weapon that can be operated on aircraft.

The overall allocation is about US$10 million less than the Navy requested in the prior fiscal year. But Trevithick notes that the recent photos of a purported railgun in China may nudge both the navy and congress to bolster American efforts to develop the new weapon.

Such expectations were underscored on February 14, when Adm. Harry Harris, the head of the US Pacific Command, said in Washington that he was especially concerned about Chinese advances in hypersonic missiles that might be capable of striking US aircraft carriers and Pacific bases before they could be detected on radar.

“We need to continue to pursue that in a most aggressive way,” and “develop our own hypersonic offensive weapons,” Harris, who was recently nominated to be US ambassador to Australia, said in testimony before the House Armed Services Committee.

Institutional momentum to develop EMRG and HVP weapons is also being generated by the 2018 National Security Strategy and Nuclear Posture Review, issued by the Pentagon in the last month, which spell out military advances by Russia and China as major security challenges to the US.

Has China tested railgun at sea?

US defense contractors have test-fired railgun prototypes on land. But so, far, none have been tested or deployed on navy ships. One hurdle involves developing onboard power sources powerful enough to fire such projectiles, while being small enough to fit on a warship.

“The Navy was really, really over-eager to a put a railgun on a ship,” Trevithick said, noting that the new technology is complex and that sea-based testing is now on the back burner.

Task & Purpose, a military veterans website, reported on February 16 that the railgun project, despite more funding, is in limbo due to a Navy decision not to build a shipboard tactical demonstrator for the weapon.

But Trevithick notes that deferring an at-sea test to focus on refining the existing demonstrators’ designs is a smart move that doesn’t indicate Navy “apathy” towards the project.

“There is no indication that the Navy has moved away from its long-established timetable of having an operational or near-operational (railgun) weapon ready for testing or even fielding by 2025,” Trevithick told Asia Times.

A weapon that can’t be jammed

One attraction of EMRGs and HVPs is their estimated unit costs of about US$25,000 per projectile – far less than the million-dollar-plus price tags of current navy missiles. Ship magazines can also be safely stacked with thousands of these non-explosive ordnance items, significantly reducing the danger of onboard explosions. Unlike missiles, inert weapons of this type aren’t vulnerable to electronic jamming. Trevithick further notes that lightning-fast railguns can strike time-sensitive targets that missiles might miss.

China hasn’t officially confirmed the existence of its railgun project at Wuchang — although the shipyard has served as a staging site for other military testing. Nor are there any signs that China has actually tested a railgun at sea.

The railgun’s long-term future with the US Navy is also unclear despite continued development funding. There are signs the navy may be leaning toward HVP projectiles, rather than railguns, as a viable shipboard weapon that can be deployed in the near term. USNI News recently quoted Capt. James A. Kirk, an officer with the Navy’s surface warfare directorate, as saying that HVPs may be a possible replacement for a Long Range Land Attack Projectile system that’s been abandoned for US Zumwalt-class guided-missile destroyers.

Kirk disclosed at a naval symposium in Arlington, Virginia on January 10 that the navy is monitoring the “technical maturation” of the HVP program “to see if we get the ranges and the capabilities that’s the right bang for the buck.”

However, Trevithick noted that HVPs travel only half as fast as railgun projectiles.