The Navy Just Commissioned Its Most Powerful Nuclear Submarine Ever 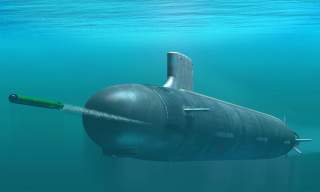 The United States Navy commissioned its news attack submarine, USS Colorado (SSN-788) into service this weekend. The powerful Block III Virginia-class attack submarine is the fifteenth vessel of its kind to join the fleet as they slowly replace the long-serving Los Angeles-class boats as the backbone of the Navy’s undersea force.

"Our submarines are in high demand today and the expectations for Colorado are a mile high," Adm. J. Franklin Caldwell, Jr., Director of Naval Reactors, said in his speech on March 17. "In her lifetime, Colorado will travel thousands of miles undetected to protect our nation and our interests around the globe. We cannot begin to imagine all the missions that she will do and all of the places she will sail, but we do know that Colorado's stealth, her endurance, her combat power, and her speed will ensure that our Navy remains in control of the undersea domain."

Colorado is the fifth Block III Virginia-class attack submarine and the Navy expects to take delivery of three additional boats of the sub type in the next several years. The Block III version of the Virginia-class incorporates a number of improvements both to reduce the cost of the vessels and to improve performance. The Block III boats feature a redesigned bow where 12 individual Vertical Launch System (VLS) tubes are replaced with two large-diameter Virginia Payload Tubes (VPTs) each capable of launching six Tomahawk cruise missiles. Meanwhile a water-backed horseshoe-shaped Large Aperture Bow sonar array replaces the air-backed spherical main sonar array. Subsequent Block IV boats will have reliability improvements so that the submarine will not have to be overhauled as frequently.

However, while Colorado and her sister ships represent the state of the art in terms of submarine technology, it is the training and the skill of the crew that make these vessels effective weapons. Thus, the Navy invests heavily in training its submarine crews—especially as Russia and China step up their undersea warfare presence.

"This is an amazing group of Sailors that are outfitted here. Every day we are doing something new for the first time. Just in the time that I've been here, I've watch the team transform into a high performance team that is able to operate the Navy's newest and most capable war fighting ship at sea, in the harsh ocean environments, ready to carry out our mission," Cmdr. Reed Koepp II, Colorado's commanding officer, said. "I have seen them achieve greatness in qualifications and I have seen them build to a level of experience and expertise, ready to start executing the nation's missions and get through our initial tactical certifications and engineering readiness."

As great power rivalry between the United States, Russia and China continues to heat up, submarines like Colorado will likely have an every greater role to play.