The Navy Just Sent an Aircraft Carrier to Vietnam. Should China Be Worried? 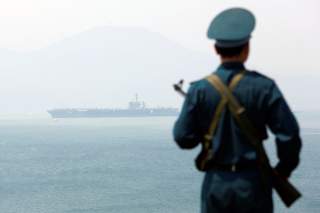 In a remarkable reflection of burgeoning strategic relations between former foes, America deployed an aircraft carrier group to Vietnam for the first time in more than four decades.

The USS Carl Vinson, a 103,000-ton aircraft carrier, along with two other large warships, arrived on Monday at the Vietnamese port of Da Nang on a five-day good will visit.

It marked the largest American military presence on Vietnamese shores since 1975, signaling the emergence of an unlikely alliance between Washington and the Southeast Asian communist regime.

“The visit marks an enormously significant milestone in our bilateral relations and demonstrates US support for a strong, prosperous, and independent Vietnam,” declared Daniel Kritenbrink, the US ambassador to Vietnam.

“Through hard work, mutual respect, and by continuing to address the past while we work towards a better future, we have gone from former enemies to close partners,” he continued.

What lies at the heart of rapidly warming ties between the two former enemies is the rise of China, particularly its growing military presence across the South China Sea, which has threatened Vietnam’s territorial and maritime interests as well as America’s naval hegemony in Asia.

With America’s traditional regional allies such as Thailand and the Philippines adopting an increasingly Beijing-leaning foreign policy, Washington has been scrambling for new and reliable strategic partners in Southeast Asia.

Determined to protect its claims in the South China Sea, Hanoi has emerged as the leading — if not lone — voice of resistance against Chinese maritime assertiveness.

Yet it is far from assured if the highly symbolic USS Carl Vinson’s high-profile visit will soon translate into a tangible military alliance against China.

In recent years, Vietnam has consistently been at the forefront of multilateral diplomatic efforts, particularly in the Association of Southeast Asian Nations (Asean), to criticize China’s massive reclamation activities across disputed land features in the South China Sea.

In response to China’s rapid militarization of artificially created islands, Vietnam has embarked on limited reclamation activities of its own, accompanied by deployment of weapons systems, including precision-guided artilleries, to some of its islands in the Spratlys.

More broadly, Vietnam has rapidly expanded its naval capabilities, including the purchase of kilo-class submarines from Russia and the development of its naval facilities in the highly strategic port of Da Nang.

The Southeast Asian country has also opened various gas fields within its exclusive economic zone, which is contested by China, to state-owned energy companies from Russia and India. In this way Hanoi aims to deepen the stakes of other major powers in protecting its resources and maritime claims in the South China Sea.

As a matter of national security doctrine, the fiercely independent Vietnam has adopted a ‘three no’s’ policy of non-alignment with one power bloc against another, non-hosting of foreign military bases on its soil, and non-alliance with and dependence on any external power.

In a classic exercise of strategic diversification, however, Hanoi has reached out to major regional powers such as Russia, India, and Japan to shore up its maritime defense and domain awareness capabilities.

Cognizant of its economic dependence on China, Vietnam has sought to attract large-scale investments from Japan, South Korea, Taiwan, Singapore and Western countries.

It has also sought to join the Transpacific Partnership Agreement (TPP), currently resuscitated as TPP-11 (minus the United States), in order to expand its export markets and sources of capital and technology.

Hanoi has thus managed to develop a modicum of strategic space as well as minimum deterrence against Chinese revanchist intentions within Vietnamese waters.

Nonetheless, the Southeast Asian country remains deeply insecure and dreads the prospect of strategic isolation. That dread is rooted in China’s growing military muscle and regional economic influence as well as the increasingly acquiescent policies of other regional claimant states, namely the Philippines under pro-China President Rodrigo Duterte.

Within Asean, for instance, Vietnam has often found itself as the lone voice standing up to Chinese maritime assertiveness, with the rest of the region preferring strategic accommodation and continued economic engagement with the Asian powerhouse.

By reaching out to America, Vietnam hopes to strengthen its hand against China. Yet, this strategy not only runs the risk of backfiring, provoking China into more aggressive action, but also faces immense structural constraints.

While Vietnam is intent on holding Chinese maritime ambitions at bay, it is also highly vulnerable to Chinese economic and military reprisals. Vietnam shares extensive land and maritime borders not only with China but also immediate China-leaning neighbors such as Cambodia.

Meanwhile, the US Congress has been reluctant to sanction sales of advanced weaponries to the communist regime, which has been constantly accused of widespread human rights violations. To date, there has been no major arms deal on the table.

Much of Vietnam’s weaponries are of Russian origin, raising concerns over technological compatibility if the Southeast Asian country were to incorporate American weaponries. Moreover, there are broader concerns over the reliability and wherewithal of America to stand up to China when push comes to shove.

Ultimately Hanoi deeply fears the prospect of strategic abandonment in the event of more explicit alignment with America and like-minded regional powers. No wonder it remains doubtful if the highly promising partnership will ever translate into a full-fledged alliance against China.