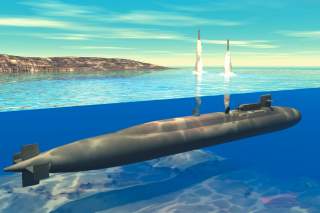 The weapons were fired off the coast of Southern California from the USS Nebraska, a nuclear-armed ballistic missile submarine.

The missile launch also represents next steps in an ongoing Navy-Lockheed effort to modernize the 1980s-era weapon for service through the next several decades. The US nuclear arsenal has taken center stage in light of the Pentagon’s new Nuclear Posture Review (NPR) and Russia’s recent announcements claiming new advanced nuclear attack capabilities.

The Pentagon’s NPR not only calls for aggressive nuclear weapons modernization and the introduction of new low-yield nuclear weapons but also heavily emphasizes the need to maintain and modernize its current, and somewhat aging, inventory of air, land and sea nuclear weapons.

Seen in this light, the test is fundamental to an ongoing Trident II D5 life-extension program aimed at ensuring the weapon can serve well into the 2040s and beyond.

Capt. Mark Behning, deputy director, Strategic Systems Programs, SSP called the test “an important demonstration of the reliable and credible sea-based leg of the US nuclear deterrent triad," according to a Navy statement.

The Trident II D5 is a massively destructive weapon designed to keep international peace by ensuring an undersea-fired second-strike ability in the event of a catastrophic nuclear first-strike on the US. The 44-foot long submarine-launched missiles have been serving on Ohio-class submarines for 25 years. The three-stage ballistic missile can travel a nominal range of 4,000 nautical miles and carry multiple independently targeted re-entry bodies, according to Lockheed information.

The missiles are also being planned as the baseline weapon for the Columbia-class ballistic missile submarines.

Navy Strategic Systems leaders have emphasized the need for long-term sustainment of the triad’s sea-based leg, which the Navy plans to maintain to 2080.

The Navy has also been working on the missile's Mk-6 guidance system to continue specific work on the weapon's electronic modules, Navy developers have said.

Navy and industry engineers have been modernizing the guidance system by replacing two key components due to obsolescence – the inertial measurement unit and the electronics assembly, developers said.

Navy officials said the Mk-5 re-entry body has more yield than an Mk-4 re-entry body, adding that more detail on the differences was not publicly available.

Within the last several years, the Navy has acquired an additional 108 Trident II D5 missiles in order to strengthen the inventory for testing and further technological development.

The U.S. and UK are collaboratively working on a common missile compartment for their next generation SSBNs or Columbia-Class ballistic missile submarines.