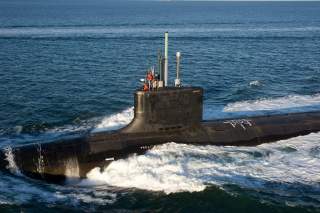 A leaked version of the Trump Administration’s Nuclear Posture Review posits that Russia is developing a new nuclear-tipped torpedo with strategic ranges that can be used to target coastal areas of the continental United States. The weapon—called Status-6—would, in the short-term—present the United States Navy with a challenge that it could not counter without significant investment in new weaponry.

“If we assume that this is a real capability—that it will have a prototype built in 2019 and become operational in early 2020’s—then this is a significant disruptive capability that the U.S. must be able to counter,” retired U.S. Navy submariner Thomas Callender, currently a senior research fellow for defense programs at the Heritage Foundation told The National Interest. “Taking its top speed of greater than 56kts and depth of greater than 3280 feet into account, this would be a difficult target to kill with current weapons.”

Publicly available information about the U.S. Navy’s Mk-48 ADACAP suggest that the weapon has a maximum speed of 55kts and a maximum depth of 2600ft, which means that the torpedo would have great difficulty in countering the Status-6.

“This would mean that if operating close to max depth, the Navy’s primary ASW [anti-submarine warfare] weapon could not reach and kill it,” Callender said. “This is not to say that the Navy could not build a torpedo in the next several years before Status-6 reaches operational status that would have sufficient speed and depth. If the Administration and DoD [Department of Defense] believe this is a capable threat, I am confident that they can find the money and the Navy would focus on rapid development.”

Given the Status-6’s size, range and speed, certain assumptions can be made about it. “I would think that at speeds in excess of 50kts the UUV [unmanned underwater vehicle] would be fairly noisy, but I am unsure of how great the detection range would be,” Callender said. “A small screw at high speed would create higher frequency noise that would not propagate as far as slower turning submarine screws and other lower frequency machinery noises.”

Moreover, it would matter where the Russian would fire the Status-6 from—because its launch location would make a significant difference in how difficult the weapon is to track. “Depending from where they launched the UUV—based on endurance they could launch from the Barents [Sea] and reach the East Coast—if it can navigate properly with inertial navigation, “Callender said. “They mention that this could be launched from larger mother submarine, which could enable it to be relatively stealthily launched closer to the U.S. coast—reducing the response time before it reaches its target and detonates. I would expect it would still be several hours transit.”

It would only be once the Status-6 reaches shallower waters that it would be vulnerable to interception. “Once it approaches the East Coast and crosses the continental shelf it must come increasingly shallower and make it easier to kill with current weapons—in the proper geometry,” Callender said. “But the closer to the coast the greater the chance for contamination or damage if the warhead had secondary explosion from a U.S. weapon hitting it.”

Moreover, given the sheer power of the Status-6’s allegedly 100-megaton warhead, the U.S. Navy would have to ensure that destroyed the weapon completely before it gets to its target. “If it is indeed a 100 megaton warhead, we would want to make sure you killed it—potentially detonating the warhead and definitely spreading nuclear contamination—far from the U.S. coast in deep open ocean,” Callender said. “It would come down to cueing of its launch and transit from acoustic arrays and MPA [maritime patrol aircraft] patrols (P-3/P-8). Based on its speed, the P-8 would be my preferred kill platform.”

One of the questions that puzzles naval experts—particularly undersea warfare specialists—is how the Russian expect to control the Status-6 weapon. “That they mention that ‘it would be controlled from surface ships’ is interesting,” Callender said. “Would it slow and come to ‘periscope depth’ periodically for a GPS fix and updated instructions? It could not maintain constant C2 [command and control.”

At the end of the day, it might not matter too much. While the United States might not have a countermeasure to defeat the Status-6—assuming it actually exists—it will not take the Navy long to build a weapon to intercept it. It will be expensive and it will not be easy, but Congress would certainly appropriate the money if the Status-6 were a real problem to be solved. “I think the U.S. Navy could defeat this potential capability given some time and sufficient funding to develop or modify weapons and develop CONOPS [concept of operations] to most effectively detect, locate and kill the UUV,” Callender said. “It would not be easy or cheap.”

But then with the Pentagon, when is anything ever cheap or easy?