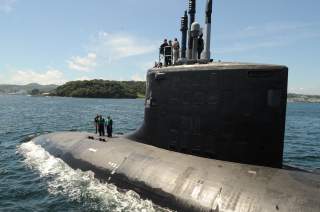 The United States Navy is looking at extending the life of its existing nuclear-powered attack submarines while also increasing the production rate for the Virginia-class boats to make up for a severe shortfall in its SSN fleet.

In the coming years the Navy’s attack submarine fleet is set to shrink to below the previously stated requirement of 48 SSNs to only 41 by 2029, the service has to do something to arrest the force’s decline let alone rebuild toward the new stated requirement of 66. That something will be to try to extend the service lives of five existing attack submarines while also trying to ramp up the production rate for the Virginia-class to three boats per year in the years the Navy does not have to build a Columbia-class ballistic missile submarine.

The Navy hopes to be able to accelerate the SSN production rate as part of a new multiyear contract it is currently negotiating, which should yield production efficiencies at Huntington Ingalls Newport News and General Dynamics Electric Boat. Those are the only two shipyards in the United States capable of building nuclear-powered submarines.

“Where can we accelerate production should that be affordable and in the budget?” James F. Geurts, Assistant Secretary of the Navy, for Research, Development & Acquisition, testified before the House Armed Services Committee on April 13. “We are looking at adding those two submarines into the contracting process. We're working through the mechanics of exactly how to do that.”

Geurts noted, however, that increasing the Virginia-class build rate to three per year depends on the funding the U.S. Congress affords the Navy. “We've spoken with your staff [Rep. Joe Courtney (D-CT)] of what that looks like in terms of budget impact, and we're continuing to refine those numbers,” Geurts said. “So, yes, I'm still committed to having options in that contract for additional submarines in '22 and '23, should that be something we jointly decide to do and can afford.”

In addition to building new submarines faster, the Navy hopes to extend the lives of five existing nuclear submarines to alleviate the pressure on the fleet. “That’s a very specific hull analysis,” Geurts said. “I think we’re in pretty good shape there. We’ll prove it with the first one this year and that will give us a little benefit.”

However, a nuclear-powered submarine has a finite life at the end of the day. The current submarine shortfall comes as a result of decisions made decades ago at the end of the Cold War, and it will take a long time for the Navy to rebuild despite the best efforts of the Congress and the Pentagon.

“We all understand that achieving this higher force structure will not happen overnight nor is not something we can simply build our way to,” Courtney said. “We need a comprehensive approach that includes not only building new ships, but also making sure that we maximize the capability and availability of our existing fleet. A ship in drydock—or worse, sitting pierside waiting to be drydocked—is of no use to our combatant commanders and only puts more strain on an overstretched fleet.”

In the end, it will simply take time and money to solve this problem. There is no overnight solution.