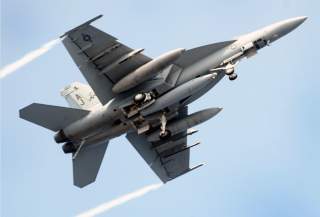 The Navy budget gives the service its long-sought after F/A-18 Super Hornet increase by adding 14 fighters and more than $1 billion in procurement funds – all as part of a sweeping effort to increase the F-18 fleet size, meet mission requirements, accommodate new technologies and ultimately fly alongside the F-35C through the 2040s.

Given the recent war-driven op-tempo involving global deployments and air strikes on ISIS, most of the F/A-18 E/F fleet, on average, has already consumed more half of its 6,000-flight hour expected service life. As a result, there has been a long-standing, multi-year Navy effort to acquire new F/A-18s in larger numbers to address urgent needs from combatant commanders.

When the F/A-18A and F/A-18C reach 8,000 flight hours, they are sent into the depot for service life extension upgrades with the hope of getting the airframes to 10,000 hours. However, many of the older aircraft have in need of substantial repairs and, in recent years, a large percentage of the Navy’s fleet of older Hornets have not been in service.

“Extension of legacy Hornet life requires additional inspections and deep maintenance that were not originally envisioned for the aircraft. Average repair time has significantly increased because of required engineering of unanticipated repairs, material lead times, and increased corrosion of airframes,” the Navy budget document writes.

As part of a specific effort to address this scenario, the Navy’s new budget request increases fund for civilian maintenance personnel hiring, depot-level maintenance work and sustainment initiatives. The goal of this, according to Navy budget documents is to “decrease the time to complete depot level maintenance caused by the number of high flight hours.”

A carrier air wing consists of about 44 strike aircraft made up of two 10-aircraft squadrons and two 12-plane squadrons complemented by several electrical jamming aircraft.

The current composition of most carrier-based air wings includes 24 Super Hornets and 20 Hornets, however the Navy plans to replace some of its existing Hornets with F-35Cs. Although the budget does increase F-35C acquisition as well, the emergence of the carrier-launched stealth fighter will not remove combatant commanders need for the F-18.

The Navy had been planning for the Super Hornets to serve well into the 2030s, but now service leaders say that timeline will need to extend into the 2040s.

The Navy plans to acquire as many as 60 new F-35C aircraft over the next five years, according to the service budget request