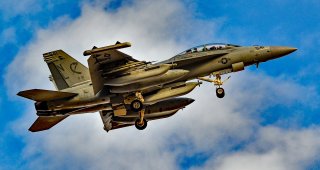 The U.S. Navy’s EA-18G Growler will soon have artificial intelligence on board to give its electronic warfare capabilities a much needed boost.

The announcement of the Navy contract comes a day after the head of U.S. Special Operations Command stated that U.S. planes were being disabled by enemy electronic warfare operations in Syria.

“Right now in Syria we are operating in the most aggressive EW environment on the planet from our adversaries. They are testing us every day, knocking our communications down, disabling our EC-130s,” said Gen. Raymond Thomas.

General Thomas did not specify which nation was responsible for the attacks, but earlier in April reports emerged indicating that the Russian military had jammed the GPS systems of small U.S. surveillance drones in Syria, disrupting their operations.

Laurie Moe Buckhout, an expert in EW and a retired Army colonel, said that Russia has invested heavily in EW following its attack on Georgia in 2008.

“The Russians put in millions on upgrades after Georgia. They’ve ended up with killer capabilities, jamming in a multitude of frequencies for hundreds of kilometers,” Buckhout said. “The Russians have redone and reengineered their entire EW fleet in the last 20 years.”

In 2016, the then commanding general of U.S. Army Europe Lt. Gen. Ben Hodges, warned that in Ukraine, Russia was deploying “electronic warfare capability at a tactical level that we absolutely don’t have.”

According to Paul Tilghman, the director of DARPA’s Cognitive EW program, the U.S. military’s approach to disrupting enemy radar is still rooted in the 1970s, when electronic warfare officers first analyzed enemy systems to identify vulnerabilities and designed countermeasures to disrupt them.

"If you see radar X, use countermeasure Y," Tilghman said. "A typical 1970s radar system was predominantly an analog system with components assembled in a specific, fixed manner limiting the radar to defined operating boundaries. Once a system was created, it was a relatively static, known quantity."

"The problem now is that if we continue to rely on that [old] approach, the radar waveforms we're expecting could be rapidly changed," Tilghman explained.

But the U.S. military is in the midst of improving its EW capabilities with machine learning algorithms that can study enemy radar and communications emitters in real-time to determine the right countermeasures to use. DARPA has dubbed this approach “cognitive EW.”

The Navy contract will provide the Growler with cognitive EW capabilities “against agile, adaptive, and unknown hostile radars or radar modes” according to a Pentagon release.

The Navy’s Growler, a variant of the F/A-18F Super Hornet, is specifically designed to wage electronic warfare and plays a critical role in operations in highly contested areas. The Growler is often deployed ahead of other aircraft to disrupt an enemy’s air defense system and provide critical cover.

The Navy expects to receive its upgraded Growler by 2019.