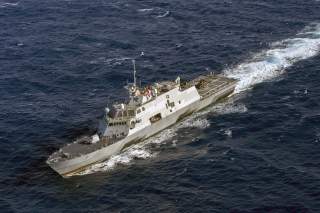 The U.S. Navy has officially selected the future anti-ship missile for its littoral combat ships.

On June 1, Defense News reported that the U.S. Navy has selected the Norwegian Naval Strike Missile as the over the horizon anti-ship missile for its littoral combat ships (LCS). The missile will likely arm America’s future frigates as well. The contract is only initially for $14.8 million, but there are contract options that could raise its value to more than $847 million.

“Raytheon and Kongsberg are providing the Navy with a proven, off-the-shelf solution that exceeds requirements for the over-the-horizon mission,” President of Raytheon Missile Systems Taylor W. Lawrence said in a press statement. “Because it is operational now, NSM saves the United States billions of dollars in development costs and creates new high-tech jobs in this country.”

The competition had originally been a three-way battle between Lockheed Martin’s Long-Range Anti-Ship Missile (LRASM), Boeing’s extended-range Harpoon missile, and the Naval Strike Missile jointly submitted by Kongsberg and Raytheon. However, last year Lockheed Martin and Boeing dropped out of the competition, arguing that the U.S. Navy had skewed its requirements in favor of the Kongsberg-Raytheon Naval Strike Missile.

“After long and careful consideration, Lockheed Martin has decided to withdraw from the U.S. Navy Over-the-Horizon Weapon System (OTH-WS) competition,” Scott Callaway, a Lockheed official, said last year when the company dropped out. “As the current OTH-WS request for proposal (RFP) process refined over time, it became clear that our offering would not be fully valued.”

According to a statement released by Raytheon, the Naval Strike Missile (NSM) “is a long-range precision missile that strikes heavily defended land and sea targets. The missile, which can defeat enemy defenses up to one hundred nautical miles away, uses advanced seeker and target identification technology.” Over at The Diplomat, Franz-Stefan Gady explains “The NSM is the successor to Kongsberg’s Penguin short-to-medium range anti-ship guided missile. The missile, featuring an imaging IR-seeker and inertial/GPS navigation, can strike both sea and land targets at a distance of around 185 kilometers (one hundred nautical miles).” It also has the ability to discriminate between the intended target and other ships and objects nearby.

It is currently used by Norway's Navy and Polish forces, with plans for Malaysia and the German Navy to use it in the future. There is also a program to develop a land-attack version of the missile.

The littoral combat ship program has faced enormous criticism since its inception. As Sebastien Roblin summed up the ships’ deficiencies, “They don’t have the firepower to hit anything more than a few miles away. They’re unlikely to survive being hit by anything in return. They cost more than twice as much as promised, and require 75 percent more crew to operate than planned for. The modular-mission capabilities that were a key selling point had to be abandoned. And they’re breaking down constantly.”

In fact, a report earlier this year by the Pentagon’s Office of Operational Test and Evaluation declared that neither variant of the LCS—Independence and Freedom-classes—“is survivable in high intensity combat.” This has led the U.S. Navy to shift gears and focus on building future frigates. Still, the United States plans to build at least twenty-nine LCS. Although this is far less than was originally intended, it is enough ships that the U.S. Navy has had to find ways to make them more capable. Some steps have already been taken: for example, last year an LCS test fired a Longbow Hellfire. The Hellfires have shorter ranges than the NSM, but could be used in some scenarios such as to take out swarming boats. Some littoral combat ships are also armed with Boeing’s RGM-84D Harpoon Block 1C missile. That missile has a range of around fifty nautical miles while carrying a 221.6 kg warhead.

The Naval Strike Missile will further enhance the lethality of the LCS by giving it the ability to target surface combatants at further ranges with greater precision. They’d still be dangerously outgunned by capable adversaries like Russia and China, however, which possess anti-ship missiles with far greater ranges. Russia’s Club-N anti-ship missile, for instance, has a reported range of around 161 nmi, while Beijing’s YJ-12 has a range of 215 nmi.

Ultimately, though, the NSM may see a greater impact on America’s future frigate program. Given the growing disappointment of the LCS, the U.S. Navy decided to begin the FFG(X) program in 2017. That program aims to procure a new class of twenty guided-missile frigates (FFGs) that will be larger and more heavily armed than the LCS. Currently, the Navy hopes to have its first FFG(X) ready in FY2020 with the second one following the year later. After that, it hopes to build two a year for the next nine years.