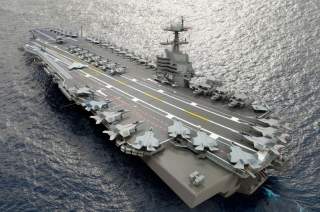 Huntington Ingalls Newport News Shipbuilding is making progress on the construction of what will eventually become USS John F. Kennedy (CVN-79), America’s second Ford-class aircraft carrier. The massive 100,000-ton ship is now 75 percent structurally complete following the recent installation of the forward area of the vessel’s main deck. Kennedy is scheduled to be christened in the fourth quarter of 2019 and delivered to the U.S. Navy in 2022 according to Huntington Ingalls.

“We are very proud of the progress we are making on the Kennedy,” Lucas Hicks, Newport News’ vice president for the CVN-79 program, said in a statement. “The ship now is 75 percent structurally erected and more than 40 percent complete. Many of the improvements we have made over the construction of CVN-78, including increased pre-outfitting and performing more complex assemblies in our shops, will allow us to launch the ship three months earlier than planned.”

Since Kennedy’s keel was laid in August 2015, the vessel has been rapidly taking shape. According to Huntington Ingalls, the ship is being built using a modular construction process where smaller sections of the ship are welded together to form a structural unit called a superlift. Once completed, each superlift is outfitted with piping, electrical equipment, cable, ventilation and joiner work and is lifted from the assembly area into the dry dock.

Huntington Ingalls also noted another milestone—one that will eventually allow Kennedy the ability to perform her mission as an aircraft carrier. “A third key milestone also was achieved recently when the first two generators supporting the electromagnetic aircraft launch system (EMALS) were installed,” the company stated.

Huntington Ingalls also shared a few additional statistics on Kennedy’s construction. “With the recent superlifts, 341 of the total 447 sections are currently in place,” the company said. “Kennedy stands about 100 feet in height in the dry dock with only the island and main mast remaining to bring the ship to its full height of 252 feet.”

When Kennedy is delivered to the fleet in 2022, the Navy will finally reach its goal of maintaining twelve carriers in its armada. However, that will only last for a short time before USS Nimitz (CVN-68) is retired after five decades of service—though some lawmakers are pushing to extend the life of the aging carrier. Extending Nimitz’s life is probably not feasible because the ship will likely have exhausted its uranium fuel for its reactors by that time.