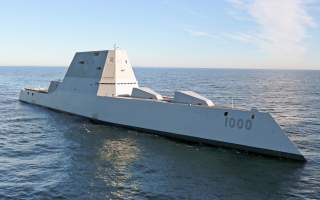 According to NAVSEA, U.S. Navy’s Board of Inspection and Survey (INSURV) reviewed Michael Monsoor and its crew during a series of demonstrations both pier side and underway. The idea was to evaluate the ship’s construction and ensure that the ship complies with Navy specifications. In the particular case, the ship seems to have exceeded expectations.  “Many of the ship’s onboard systems including navigation, damage control, mechanical, electrical, combat, communications, and propulsion systems were tested to validate performance met or exceeded Navy specifications,” NAVSEA said in a statement.

General Dynamics Bath Iron Works, which built the massive destroyer, was also pleased. “The performance of Michael Monsoor (DDG 1001) during Acceptance Trials demonstrated the capabilities of this ship and the men and women who built it,” Bath Iron Works president Dirk Lesko said. “The results are a credit to the cooperation that exists between BIW and its U.S. Navy and industry partners.”

With Michael Monsoor set for delivery in the coming months, BIW is currently building the last of three DDG-1000s that the Navy ordered. The future USS Lyndon B. Johnson (DDG 1002) is currently under construction at the yard. However, given the sheer expense of the DDG-1000 class and its lack of certain ballistic missile defense capabilities—not to mention a number of outmoded technologies onboard—the Navy opted not to continue building the Zumwalt class. The three-ship class has cost the Navy $23 billion, with each ship coming in at roughly $4.25 billion per vessel when research and development is not factored in.

Eventually, the Navy will have to build a successor to the DDG-51 destroyers. The Navy has started to look at requirements for a Future Surface Combatant, but the program largely remains undefined.