The New Middle East Arms Race Is Not What You Think 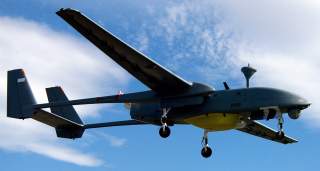 In the long, bloody Middle Eastern arms race, two new contenders have appeared. In the one corner is Hamas, which is so outgunned by Israel that it has resorted to launching flaming kites across the border to set Israeli farms ablaze. But the Israelis have their own secret weapons: toy drones, flown by civilian hobbyists, to intercept the incendiary intruders.

The weird aerial duel began in March, during bloody clashes between Palestinian protesters and militants, and the Israeli military, along the fence separating the Israel-Gaza border. Lacking weapons to take on Israeli forces, and also wary of firing rockets into Israel that might trigger an Israeli invasion, the Palestinians came up with a clever solution.

They launched numerous kites armed with Molotov cocktails—or even an explosive charge—that float across the border into southern Israel. While they were not rockets or mortar shells, make no mistake: they aren't toys. While no Israelis have been injured, as many as 4,300 acres of farm and parkland have been burned by the homemade incendiary weapons.

However, the Israelis quickly came up with a clever countermeasure: anti-kite drones. More specifically, one-pound racing quadcopters. Their armament? Hooks. Yes, hooks, like the talons of an eagle.

The drones are equipped "with a camera that offers an up-close view of the moment when it tears into the incoming kites carrying Molotov Cocktails, and chopping them down in their path," according to Israeli publication Ynet (the article actually has a video of an interception).

In purely military terms, Hamas's Great Kite Offensive isn't exactly the London Blitz. Given the current Middle East drought that has sparked numerous wildfires in Israel, it's not always clear whether a fire was caused by a kite or something else. Nor will a kite be mistaken for a smart bomb: they land where the wind takes them. Nonetheless, Hamas has unleashed a weapon that suits the organization perfectly: cheap, homemade and not likely to antagonize world opinion like a rocket aimed at an Israeli city. Just as important, this weapon can’t be intercepted by a missile defense system like Iron Dome (the thought of a $100,000 interceptor missile chasing a kite is almost satirical).

It would be exaggerating to say that kites are the weapon of the future (in fact, they are an old weapon—Chinese armies used them almost 2,500 years ago). But Hamas has found a way to harness two elemental factors: fire and agriculture. In today's world, incinerating farmland or nature reserves can be as physically and psychologically devastating as destroying a factory.

On the other hand, Israel had demonstrated that a low-tech weapon can be stopped by a low-tech defense. One has to wonder how the Pentagon would respond to incendiary kites floating across the border from Canada or Mexico. A $10 billion anti-kite defense that takes five years to deploy?