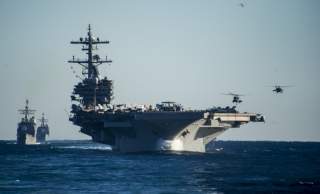 The revised version of the US maritime strategy (A Cooperative Strategy for 21st Century Seapower - CS-21R), released last month, has been generating excitement in maritime circles. The new document updates concepts and strategies in the original 2007 document (CS-21) to make them more relevant in the current maritime environment. It is especially valuable for clearly identifying Chinese assertiveness as a threat, for making existing strategy more relevant, and for providing specific ways to guide operational thinking in strategic scenarios.

From an Asian perspective, the document's release is timely. Not only has the US been expanding the scope of its operations with Asian littoral states, regional maritime forces have been grappling with a complex set of challenges. To its credit, the new maritime strategy attempts to comprehensively address the entire spectrum of nautical issues, pulling together diverse strands such as nationalistic posturing in the Asia-Pacific, nontraditional security challenges in the broader maritime littorals, new technologies complicating security responses, and even fiscal prudence as a key consideration in planning future maritime operations.

Like its predecessor, the new document underscores maritime cooperation as the foundational principle of effective maritime security. However, departing from the earlier version's articulation of the concept as a kind of doctrinal "end" in itself, CS-21R presents maritime cooperation and transnational partnerships as a strategic imperative in achieving long-term security objectives. This difference, although marginal, is instructive because it implies a greater keenness on the part of the US Navy (USN) to engage and involve partner-navies in its maritime endeavors. Consequently, the new document advocates a more purposeful engagement with allies and partners to achieve greater synergy in security operations.

The most noticeable aspect of the CS-21R is its clear acknowledgement of China as a key challenge. Unlike its predecessor, the new document candidly recognizes China's maritime expansion and territorial claims as a source of regional unrest. But it stops short of recognizing China's A2/AD challenge, desisting from making the all-important link, even as it pronounces "all-domain access" as a strategic prerequisite to all its global endeavors. Yet, it raises the possibility of nautical strife arising from the military resurgence of another Asia-Pacific power, Russia. Since traditional challenges are only likely to grow, the document projects "forward presence" as the bedrock of the USN's future security undertakings. The authors explain the need for a joint force to gain and sustain security operations, even as they emphasize flexibility, adaptability, scalability and integration in the sea services.

The CS-21R makes clear that while the United States is exporting more energy than it imports, it remains tied to the global economy. Since the latter remains wholly dependent on the uninterrupted supply of oil and gas from the Middle East and Central Asia, the USN would continue to play an important role in securing oil-flows by forward deploying in key theatres. Oddly, however, the emphasis on forward operations isn't borne out by the dim prospects of future growth in naval force levels. According to the authors, the USN's current budget submission provides for just about 300 ships, of which 120 will be forward deployed by 2020. This is a marginal rise from current force levels - leading to some doubts whether the Navy will at all be able to sustain forward presence in critical areas of operations.

The new maritime strategy, however, offers some pointers in terms of operational imperatives and trends. The emphasis on cyber warfare, electro-magnetic spectrum operations, battle-space awareness and cross-domain synergy is a useful illustration of the evolving needs of contemporary naval engagement. It is also a reminder that even as navies learn to operate in a climate of financial hardship, they must utilize available means innovatively to effectively tackle nontraditional and regular challenges simultaneously.

Equally interesting, from an Asian perspective, is the introduction of the term "Indo-Asia-Pacific" - an integrated region where the "US Rebalance" is meant to play out. While the document announces a new policy aimed at positioning approximately 60 percent of Navy ships and aircraft in the said region, it does not make a case for distributing resources equally in the Western Pacific and broader Indian Ocean. With increased assets in Japan, Guam, Singapore, and Australia, it is clear the thrust of the Navy's operational focus continues to be in the Pacific theatre.

To be sure, the CS-21R's framers devote renewed attention to regions that were neglected in the previous version. But it doesn't appear entirely plausible. For instance, the reappearance of Europe and Middle East as theatres of strategic attention - though well-reasoned, as a contingency occasioned by the USN's need to operate in the Mediterranean, the Levant and Northwest Asia - seems like an exercise in box-checking.  It is unclear how the US intends to provide security around the Eurasian landmass while forward deploying a majority of its operational assets in the Pacific.

The document's exposition of naval power projection as a form of "smart power" is noteworthy, particularly the notion that classical naval capabilities can be used in benign missions such as HADR (as demonstrated by the USN during the 2010 earthquake in Haiti, the 2011 tsunami in Japan, and the 2013 typhoon in the Philippines). It is also noteworthy that the document expands the US Coast Guard (USCG) role in maritime security. Underlining the USCG's stellar contribution in building partner-state capacity for maritime governance, the authors announce the coast guard as the lead agency responsible for security in the Western hemisphere. The raised profile of the USCG also raises the possibility that the service could support conventional maritime operations in the Eastern Pacific during a conflict with China.

Ironically, the only noticeable gray-area in CS-21R - apart from the issue of squaring budgets with resources - involves China. The PLA-Navy is growing in size and will soon be the largest presence in the Asia-Pacific region. From a strategy of area-denial the Chinese navy might soon move to one of area-dominance (worryingly not just in the Pacific but also in the Indian Ocean). That means that the US will need to counter China's A2/AD strategy in its near-waters and be prepared to defeat PLAN forces in the far-seas. With its existing force levels in the region, however, it seems unlikely the USN will have the capability for both sea-control and active war-fighting.

Nowhere is this more relevant than in the South China Sea, where the US and its allies are involved in a power struggle with China. Washington realizes its limitations, which is why the "Air-Sea Battle" concept has been recently recast as the "Joint Concept for Access and Maneuver," presumably in a bid to make it seem less confrontational to China. In fact, the USN has not only toned down rhetoric on countering China's A2/AD complex, it has also been building a closer relationship with the PLAN. Not surprisingly, the new maritime strategy highlights Beijing's efforts to be a responsible maritime player, extolling its support for Somalia counter-piracy operations, the PLAN's HADR missions, and participation in multinational naval exercises, and the signing of the Code for Unplanned Encounters at Sea (CUES) that has served to reduce suspicion in maritime Asia.

For Asian analysts, there is much to be gleaned from CS-21R. Its characterization of the emerging maritime dynamic in the Asia-Pacific is apt and holds revealing lessons for other navies. But it is Washington's willingness to articulate a strategy that identifies Chinese assertiveness as a threat that is most refreshing, especially since earlier documents sought to tip-toe around the contentious subject. In fact, now that the US has clearly called out the China threat, other Asia-Pacific powers might be encouraged to follow suit in the revision of their own maritime strategies.

In the pursuit of the objectives laid out in the new maritime strategy, the Indian navy (IN) is likely to be a key partner. But New Delhi is aware that Washington's dependence on regional states is growing. There will be a stronger demand by the USN for high-end collaboration with the Indian navy. So far, India has parried US efforts to link IN-USN cooperation to larger issues of global balance of power. But increasingly, there is a sense that India is expected to not just shoulder a larger proportion of the security workload in the Indian Ocean, but also partner with the US in limiting China's freedom of action in the broader Indo-Pacific. The message in the new maritime strategy is clear: "load-sharing" is now the animating ideology of the USN's concept of collaborative operations and it applies to both irregular and traditional forms of security.

The CS-21R is a credible attempt to refine an existing strategy to make it more relevant to the times. It gives practitioners concrete tangibles to guide operational thinking in strategic scenarios. But it honestly acknowledges that the US isn't the sole arbiter of maritime security in the global commons.