The Next A-10 Warthog: An Armed to the Teeth 'Flying Coke Can'? 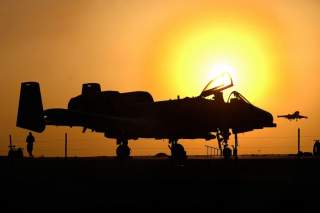 When a senior Air Force official offered me a correction some months ago, a Marine colonel friend of mine suggested that I “tell him to stop bothering you and to get back to trying to kill the A-10.” We may actually now be getting past the jokes. The air and ground crews of A-10Cs are doing such yeoman service against Da’esh that the retirement is clearly on hold. Now the USAF is talking about actually replacing that Cold Warrior the Thunderbolt II, and drafting the requirements for what might come next. That might not be an updated clone of the venerable jet.

Last week, at his confirmation hearing before the Senate Armed Services Committee, General David Goldfein (the hopefully incoming chief of staff) offered some thoughts on how he’d like to improve on what he’s got:

“Why is it I only get a minute and a half of trigger pull on a 30-millimeter bullet? Why don’t I get ten minutes? Why is every bullet not precision-guided? Why do I spend so much time in having to figure out who’s actually friend and foe on the ground when we have technology to be able to help us do that? Why is it that I have to do all the work on collateral damage estimates when I have a machine that can help me do that?”

All that got me thinking about the qualities that the next fixed-wing ground-attack aircraft could have, the tradeoffs that could be made, the contractors that might offer solutions, and how the Defense Department might structure the problem.

Inexpensive? According to current Chief of Staff General Mark Welsh, at almost $20,000 per flight hour, the A-10C is almost as expensive to fly as an F-16C. When one builds a plane to survive ground fire, one builds it tough, but the planes are getting old. Meanwhile, the USAF pleads poverty in its replacement, as all the money is tied up in the F-35, the KC-46, the B-21, and that huge space budget. So whatever comes next should be cheap; with the next plane, Welsh aims for under $5,000 per hour. Note, though, that he didn’t discuss purchase price—that must be low too, if it’s to fit into that budget. So are the two generals just describing a rethought and reworked MQ-9? An A-29? General Atomics probably already has the viewgraphs. Sierra Nevada and Embraer would certainly be eager too. Who knows—maybe such a requirement could even get Boeing interested in fighters again.

Survivable? Such a plane would not be another radar-evading black project, and that would keep the costs manageable. After all, the A-10C is not remotely stealthy either. Even its signature weapon has an immense audible signature; as Doctrine Man says, brrrrrt is the unmistakable sound of freedom. Maybe if the future plane is firing single precision-guided shots at night, it stands a chance of avoiding visually-aimed ground fire. Otherwise, commanders would either restrict its employment to areas of lower threat, or accept high casualties. Indeed, in the 1980s, the A-10 wasn’t meant to survive for long. Its basing might have been a bit more secure, as the pilots could land on highways when incoming missiles cratered their runways. But while airborne, Thunderbolt squadrons were meant to fly over and tear up Warsaw Pact columns to blunt the offensive against West Germany in the first few weeks of the war. Losing planes was fine as long as the enemy lost a lot more tanks, trucks, and troops.

Flexible? Pleas for more money from the USAF are often amusing to allied air arms with more parsimonious governments, but it’s notable that most have collectively forgone fixed-wing attack aircraft in favor of helicopter gunships and presumably more flexible fighter-bombers. The outgoing chief of staff wants to pursue flexibility in the form of a “flying coke machine”—a plane loaded with lots of weapons, and different types of weapons, any of which can roll out on a downward trajectory whenever troops below select one. After all, as Colin Angle of iRobot has observed, vending machines have been by far the most economically successful application of robotics to date. But when I tried to explain the idea to my nine-year-old son Henry, he gave me a look that said maybe an Iron Man Suit would be cheaper. The idea is rather akin to Defense Secretary Carter’s conception of another attempt at the arsenal plane. It may be a less creepy version of our own August Cole’s concept of the 3D-print-a-weapon AC-46 gunship in his recent short story Antfarm.

So is this a gunship? Sidestep for the moment the vulnerability of multiengine turboprops at medium altitude when the enemy has any sort of anti-aircraft weapon. Both A-10s and AC-130s have been very important in the fighting in northern Syraqia—making for some good gun-camera video—but at about $45,000 per hour, flying an AC-130U is more than twice as expensive as flying an A-10C. It's nine times as expensive as General Welsh’s target cost. Monies like that are hard to budget into a long, slow, and grinding war against Da’esh. Similarly, the F-35 may eventually prove a phenomenal airplane, but the USAF may actually have been considering new F-15s or F-16s to backfill gaps in the force. If things are that bad, then the USAF needs a two-track fleet just to endure the maintenance costs of whatever long campaigns continue to emerge. Perhaps there is a partial solution here. Facing its own fighter jet shortfall, the USMC recently chose to provide “gunships for all our Marines” by arming its KC-130s and V-22s for limited ground attack. That’s cheaper, but again, not so survivable against a first-rate opponent.

Then just how does one combine affordability, survivability, and flexibility in one airplane? As Council Member Byron Callan observed in a research note just yesterday, “older aircraft may not be survivable over modern battle areas, but unless there are dramatically higher levels of spending for F-35s, we continue to expect more innovative solutions will emerge to deliver air capability.” The problem is challenging, and challenging for contractors trying to adapt existing solutions. It’s fashionable to say that the airframe isn’t the issue, but it does define the carrying capacity. Further miniaturization of weapons would be great for limiting collateral damage, but if the bombs really shrink to the size of soda cans, near-misses may have little effect. And inherent in this problem is the possibility that the Air Force will again allow better to become the enemy of good enough.

How all these needs can be balanced is such a fluid question that the USAF might consider putting more than one project office on the task. The service might consider handing this one to the Rapid Capabilities Office, which seems to be running a lean organization overseeing the B-21 project. The Office of the Secretary of Defense might aim to leverage the several services’ capacities for bureaucratic competition, as they have differing proclivities towards manned or unmanned, fixed- or rotary-wing, fast- or slow-moving, and high- or low-altitute. Someone might even try to crowdsource some ideas. An open process might encourage ideas even crazier than tiltrotor-tanker-gunships to emerge.