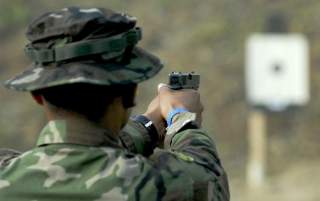 The advent of 3-D printed firearms is shattering the foundations of government gun control and reviving an important debate about the place of firearms in modern democracies. In the next decades, the dissemination of printed guns will force public institutions and citizens to adapt, whether they like it or not. A more widespread knowledge of gun safety will be necessary to cope with this development.

Since 2012, and the initial efforts made by the non-profit organization Defense Distributed to design and distribute information related to the digital manufacture of arms, desktop gunsmiths  armed with 3-D printers have developed increasingly reliable firearms. The implications of this technological feat far exceed the perennial debate on gun control in the United States.

In modern democracies, a majority of citizens expect their government to provide them with safety and order. Most of them appreciate that state institutions need to be able to control and trace the use of firearms to fulfil their security mission. Thus governments have set up legal frameworks to regulate the manufacture and sale of firearms.

The ability to print guns at home, based on blueprints that are available online and the use of increasingly affordable and reliable 3-D printers, directly challenges this state of affair. The trivialization of the manufacture of guns will without a doubt complicate state control of small and require significant regulatory adjustments.

Defense Distributed is now advertising the “ghostgunner,” a compact machine that can be used “to manufacture unserialized firearms in the comfort of your home,” which should become publicly available for under $1500 before the end of 2014. The ability to manufacture ghost guns at home could shatter the foundations of gun control and generate strong opposition from gun control advocates in government and elsewhere. If the ghostgunner becomes truly available, the current gun control debate on the specifications of firearms will become completely obsolete.

Public institutions have already opposed printed guns. When Defense Distributed made the blueprint of its “liberator” gun available online, the State Department claimed it breached the Arms Export Control Act and the non-profit organization decided to take the files down. The city of Philadelphia went further and passed a 3-D printer gun ban. Abroad, Japanese authorities arrested one of their citizens for possessing guns made with the help of a 3-D printer.

So will printed guns revolutionize gun control? Governments throughout the world have never had complete control over small weapons. Domestically, the U.S. Constitution actually allows citizens to manufacture their own firearms, including 3-D printed guns, for personal use. Abroad, most Western governments have long supported the legal export of firearms to other countries, including dictatorships, and covert shipments of small weapons to non-governmental organizations, including “moderate” rebels in Syria and less moderate mujahidin fighting against the Soviet Union in Afghanistan in the 1980s.

Printed guns could simply add to this habit. Their potential intractability will allow agencies like the CIA to support foreign paramilitary forces more covertly. In a less controversial context, Special Forces, deployed in far-away countries, will welcome the ability to manufacture their own weapons to satisfy pressing operational needs. Unsurprisingly, the U.S. Department of Defense has already launched a pilot program to explore the possibilities of additive manufacturing, or 3-D printing.

Given the government’s consent for the use and dissemination of firearms in these situations, some commentators consider its opposition to printed guns to be an hypocrisy.  There is no denying that the ability to manufacture and distribution of weapons is in the public interest, the question is who and how should this interest be represented?

For libertarians, the advent of ghost guns is an expression of their right to bear arms, as inscribed in the Second Amendment to the U.S. Constitution. From this perspective, ghost guns can empower the people against big government and corporations. Robert Steele, a former CIA officer turned open source activist, notes that ghost guns challenge what he considers to be “the two greatest threats to humanity, the government monopoly on force, and the corporate monopoly on information.” In his opinion, open source everything, including firearms, is the antidote.

Anti-gun advocates will point out that more people already die of gun violence in the U.S. than in all the other Western states. To them, printed guns and the complete liberalizations of firearms are worrying because they have the potential to multiply firearm related deaths.

In practice, it may already be too late — perhaps even useless — to hold a new debate between libertarian and gun control advocates since easy access to guns, through 3-D printing, may soon become the norm. When this will be the case, governments will have a hard time preventing people from printing what they want, including guns. Blueprints may not be readily available on internet anymore, but in the age of internet, they will remain so to those who are keen enough to look for them.

If firearms do become so readily available, most Western governments and societies will have a hard time coping with the societal impact. In Europe, where political culture has traditionally given a much greater role to the state in security matters, most citizens fear and dislike firearms and have little to no knowledge of basic gun safety rules. The advent of ghost guns could therefore lead to a growing number of incidents related to firearms. Their accessibility will also offer gun-seeking criminals an additional and more discreet source of supply.

For the time being, ghost guns constitute an opportunity for citizens to re-consider the role our governments and for-profit companies play in the market for firearms, and the politics behind selective gun control. At a societal level, the possibility of a complete liberalization of firearms creates a compelling need to educate younger generations about the use of firearms.

Dr. Damien Van Puyvelde is Assistant Professor of Security Studies and Associate Director for Research at the National Security Studies Institute, The University of Texas at el Paso. His research focuses on the relationship between democracy and security.