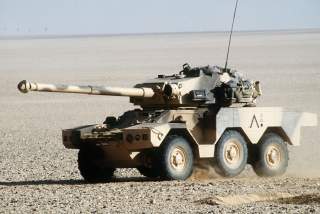 The Nigerian military has announced that it captured from Boko Haram a “T-55 armored tank” and a “highly sophisticated” armored personnel carrier during a battle near the town of Konduga in Borno state.

This indicates that Boko Haram has tanks and armored personnel carriers and is growing in military strength.

There are unanswered questions. Sahara Reporters carries a picture of the captured tank which it identifies as a “T-55.” However, the picture is not of a T-55 tank. The T-55 is of Soviet manufacture first produced more than fifty years ago. The militaries of Chad, Central African Republic, Congo, Togo, and Nigeria all have T-55’s or a variant in their arsenals. Qaddafi’s Libya had many of them. If the tank was indeed a T-55, Libya would be a likely source. However, the “tank” in the photo appears to be a Panhard ERC-90 Sagaie, a wheeled armored fighting vehicle of French manufacture. Chad and Cote d’Voire each have a few of these vehicles, and, according to one commentator, the Nigerian military has forty-two of them. If that is accurate, then it is likely that the tank and the armored fighting vehicle were stolen from a Nigerian military armory and did not come from Libya.

Hard evidence as to where Boko Haram gets its weapons is scarce. But, a credible hypothesis is that most of its weapons are stolen from Nigerian military sources.

This piece first appeared in the CFR blog Africa in Transition here.