The Next Cuban Missile Crisis: The Showdown in Ukraine? 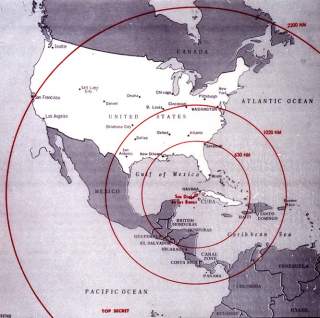 The window of opportunity for multilateral talks to end the violence in the Ukraine is closing fast.  The EU's fears of imposing stronger economic sanctions against Russia has fallen away in response to its outrage over the MH17 tragedy and evidence that Russia continues to supply heavy weapons to Ukrainian separatists.  The US is expected within days to follow with even more crippling sanctions.

The positions held by all parties to the conflict - Ukraine, the pro-Russian separatists, Russia, EU and the US - are solidifying to a point where opportunities are becoming fewer for starting negotiations to reduce tensions and prevent future miscalculations like the MH17 disaster that could push Russia and Ukraine closer to war.

During the Cold War, the Soviets and the Western Alliance were implacable enemies.  Still, these foes understood the limits of a confrontation in order to avoid miscalculations that could lead to war.  During the 1962 Cuban Missile Crisis, Kennedy and Khrushchev chose flexibility over hardened positions to avoid a military confrontation that could have started World War III, and afterwards installed the hotline between the US White House and the Kremlin to help prevent future crises.

In 2014, the stakes for the global community on the worsening situation in Ukraine are not as high as they were in the waters off the coast of Cuba in 1962.  But there is little doubt that all parties to the crisis in Ukraine have become vested in the correctness of their national viewpoint and have little room, if any, for compromise.

All sides share some of the blame.  In Russia, President Putin enjoys record high public support for his position on the Ukrainian separatists, annexing Crimea and reclaiming Russia's role as a global power.  Polling data and anecdotal findings shows a majority of Russians across all age groups are sympathetic to this view.

In the US, a rigorous national policy debate over the crisis in Ukraine and Russia is long overdue.  The Cold War rhetoric and the demonizing of Russia and President Putin in the media and by several members of the U.S. Congress is driving the policy debate toward knee jerk reactions and away from thoughtful deliberations to forge a consistent long-term Russia policy.  Thomas Graham and Jeffrey Mankoff presented compelling arguments in this publication for such a reexamination of policy.

Europe was brutally awakened by the MH17 tragedy.  Europe's economic dependency on Russia played a role in its disjointed response to the crisis in Ukraine and factored into Russia's cost-benefit analysis on Crimea and Eastern Ukraine.  Europe must act on developing a Russia policy with a long-term view to reduce its economic dependency on Russia, especially for energy.

The outlook from the Ukraine is not promising.  Attempts by the pro-Russian separatists and the Ukrainian government to find common grounds for negotiations have failed.  Calls for multilateral negotiations have floundered due to a lack of trust on both sides.  A dangerous stalemate is emerging.

Who will blink first?  Russia?  Maybe, but don't count on it.  While capital flight is at record highs, financing and international investors have virtually disappeared in Russia, the price of a barrel of oil remains at over $100.  Russia withstood the deprivations from a revolution, an existential threat from Nazi Germany and the chaos of the post-Soviet era, and is not likely to give in to the consequences of economic sanctions.  The US?  Not if it develops a long-term and consistent Russia strategy and policy framework, as other crises develop in the Middle East and Asia and draw policymaker's attention.  The EU?  Not if it takes steps to reduce its energy dependence on Russia.

In the meantime, it would be helpful for all sides to reflect on the Cuban Missile Crisis.  Kennedy and Khrushchev learned about the importance of being transactional to avoid letting strongly held positions dictate strategic decisions in the heat of a crisis.

Tom Thomson is the Principal of T. Thomson & Associates, LLC, an international strategy advisory firm, which counsels international companies on business and communications strategies in Russia and Eurasia.  He was based in Moscow for over a decade.