The Next Great Arms Race Is Here: Missiles vs. Missile Defense 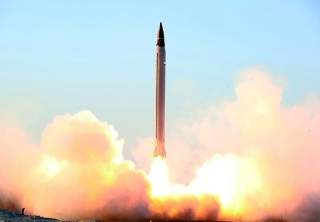 It was only a matter of time. As major powers, rogue regimes and terrorist groups acquired and, in a number of instances, employed increasingly sophisticated arsenals of rockets and ballistic missiles, those countries that found themselves under the gun, so to speak, would see an urgent need for missile defenses. Europe, the Middle East and East Asia are all experiencing the classic arms race action-reaction phenomenon. It is likely only a matter of time before the U.S. will find it necessary to significantly enhance its missile defenses of the homeland.

North Korea and Iran have been roiling the international system while demonstrating increased capabilities with a continuing, even intensifying, series of ballistic missile tests. In 2015, Pyongyang claimed to have become only the sixth nation in the world to successfully test a sea-launched ballistic missile. The North Koreans are working assiduously on an intercontinental ballistic missile (ICBM) capable of reaching the U.S. homeland and recently saluted the G-20 summit in China by firing three short-range ballistic missiles into the South China Sea.

Iran appears to have turned the nuclear agreement into a reason for increasing the number of ballistic missile tests. In the year since the Joint Plan of Action was signed, Teheran has conducted eight missile tests, several involving multiple simultaneous launches. Iranian ballistic missiles are currently capable of holding at risk targets in Southeastern Europe, the Levant, the Saudi Peninsula and the Red Sea. Iran is also working on a space launch vehicle, a surrogate for an ICBM.

It is not surprising that the Republic of South Korea would not only move aggressively to acquire advanced missile defense systems but do so with an eye to building a layered defense capability. Seoul defied Beijing’s objections when it came to deploying the land-based Terminal High Altitude Area Defense (THAAD) system. Now the South Korean government has announced that it intends to equip the last three of its new class of indigenously-built destroyers with the most advanced version, Baseline 9, of the battle management software to operate the Aegis ballistic missile defense (BMD) system. The new software allows for improved tracking and targeting of multiple ballistic and air-breathing objects and the conduct of multiple, simultaneous intercepts. The combination of the Aegis BMD system, THAAD and the shorter-range Patriot PAC-3 interceptor will provide South Korea with a layered defense against North Korean missiles.

U.S. allies in the Middle East have long seen acquisition of missile defense systems as a key military requirement. Israel, with considerable financial and technological support from the United States, is constructing a robust layered defense with several versions of the Arrow long-range interceptor, the shorter-range David’s Sling, the short-range Iron Dome and the Patriot PAC-3. This layered defense will allow Israel to engage the full spectrum of threats from long-range Iranian ballistic missiles to Hezbollah and Hamas rockets and even unmanned aerial systems. The United Arab Emirates has acquired the THAAD system. Saudi Arabia has deployed a large force of Patriot PAC-3 interceptors. This system has been employed successfully to intercept Scud missiles fired by Yemeni jihadists. The Royal Saudi Navy has been exploring the possibility of acquiring a variant of the U.S. Littoral Combat Ship equipped with the Aegis radar and battle management system and a vertical launch system for the Standard Missile-3 anti-missile interceptor.

Ironically, despite being faced with threats from Iran and an increasingly bellicose Russia, it is Europe that is lagging behind in the deployment of missile defenses. While NATO has taken the initial step of integrating national air and missile defense early warning and tracking capabilities, the Alliance has been wholly deficient in deploying actual intercept capabilities. Poland recently decided to acquire the Patriot PAC-3, providing that country with a capability to intercept short-range ballistic missiles. The defense of Europe against ballistic missile threats has been largely a function of U.S. initiatives, first the deployment of Aegis BMD capable warships and, last December, the first site for the Aegis Ashore in Romania. European members of the Alliance need to step up and deploy modern anti-missile systems.