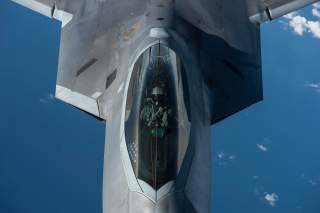 While is it becoming increasingly clear that North Korea possesses both intercontinental ballistic missile (ICBM) technology and nuclear warheads, there are still many who doubt that Pyongyang has a miniaturized weapon that could fit into a functional reentry vehicle (RV). But as has often been the case, the United States could be underestimating North Korean prowess, just as Washington did with China, during the 1960s.

To prove its capabilities, Beijing test fired an operational medium range ballistic missile fitted with a live nuclear warhead on October 27, 1966. Given that many American military officials including the vice chairman of the U.S. Joint Chiefs of Staff, Air Force Gen. Paul Selva, downplay North Korean capabilities, might Pyongyang follow in the footsteps of China, the Soviet Union and the United States itself in conducting an end-to-end test of a live nuclear missile? Analysts are divided on the issue—but it would put to rest any doubt that North Korea has a fully operational nuclear-tipped ICBM.

Jeffrey Lewis, Director of the East Asia Nonproliferation Program at the James Martin Center for Nonproliferation Studies at the Middlebury Institute of International Studies at Monterey, believes that North Korea could very well conduct such a test.

“Yes, if we push them hard enough,” Lewis told The National Interest.

As is currently the case with North Korea, the United States continually downplayed Chinese technical capabilities. Indeed, it would not be the first time that inherent American biases had led to disaster. In previous years, prior to the Japan’s December 7, 1941 attack on Pearl Harbor, the United States had similarly discounted Japanese capabilities.

“If you read the American magazines and newspapers in 1941, it’s amazing how the Japanese were considered a funny, curious people, who were technologically inept,” historian Steve Twomey told the National Geographic.

“They were supposedly physiologically incapable of being good aviators because they lacked a sense of balance and their eyes were not right. It was even believed that the Japanese were bad pilots because, as babies, they would be carried on the backs of their big sisters and got bounced around, so their inner ear was knocked askew.”

Similarly, when China started to develop its nuclear capabilities with Soviet assistance, Washington was dismissive of Beijing’s technological progress—just as many dismiss Pyongyang’s potential capabilities. Indeed, many of the proclamations emanating from Washington from those years are similar to today’s rhetoric.

But China was not alone in conducting a live-fire nuclear missile tests, both the Soviet Union and the United States have conducted similar end-to-end tests. As Joshua H. Pollack, editor of the The Nonproliferation Review and a senior research associate at the James Martin Center for Nonproliferation Studies, and colleague Catherine Dill, another senior research associate at the same institution, note in a recent Washington Post op-ed, the Soviets launched a nuclear weapon into space on a R-5M medium-range ballistic missile. According to Pavel Podvig, director of the Russian Nuclear Forces Project—who spoke briefly to The National Interest—the R-5M/SS-3 missile flew from Kapustin Yar to a steppe near Aralsk on February 2, 1956.

“The Soviets may have done it more than once in the late 1950s,” Pollack told The National Interest.

The United States, too, conducted a test of a nuclear-armed ballistic missile with a live warhead. Called Frigate Bird—the part of Operation Dominic— the test involved USS Ethan Allen (SSBN-608) launching a Polaris A1 ballistic missile that flew roughly 1500m before culminating in a 600KT airburst at 11,000ft over Christmas Island.

But while a live-fire nuclear-armed ICBM test shot would prove to the world without a shadow of a doubt of North Korea’s capabilities, other analysts have doubts that Pyongyang would take the extraordinary risk to do something along those lines.

“I seriously doubt the North Koreans would do this. And there is no reason to do it. Remember, even though North Korea is not a signatory to the CTBT [Comprehensive Nuclear-Test-Ban Treaty] or the LTBT [Limited Test Ban Treaty], they have not tested in the atmosphere. They are observing the ban on above ground tests.  They want to demonstrate that they are a responsible nuclear power.”

Lewis said that it is possible that North Korea might attempt a live-fire ICBM test, but declined to put odds on the chances of such an occurrence.