The Next Scary Military Acronym You Need to Know: IND (Improvised Nuclear Device) 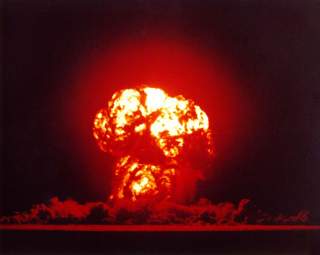 One of the most terrifying acronyms in the world is IED, or Improvised Explosive Device. First coined by the British in the 1970s, when the IRA demonstrated its expertise in homemade fertilizer bombs, the term IED has come to symbolize a new form of warfare, where death can come at any moment from a device buried in the ground or an innocent-looking car parked at the corner.

But if you thought IEDs were bad, get ready for an even more horrifying acronym: the IND, or Improvised Nuclear Device.

What is an IND? If you’ve seen any movies or books where the terrorists or the super villains build a nuclear bomb and hold the world hostage, then you know what an IND is.

And here is what an IND can do, according to a U.S. Department of Homeland Security hypothetical scenario for a nuclear 9/11. If a terrorist group were to build a ten-kiloton bomb (the Hiroshima bomb was just fifteen kilotons) using nuclear materials smuggled into the United States, and detonate it in a major city, there would be one hundred thousand casualties as well as contamination of as much as three thousand square miles.

Ever since James Bond stopped SPECTRE from stealing nuclear weapons in the 1965 film Thunderball, the world has been waiting for a terrorist nuclear attack. In fact, there have been so many studies, predictions and warnings about INDs that they have become a sort of nonstop fire alarm for what everyone assumes is inevitable. Nonetheless, just this past April, President Obama reminded us that a terrorist nuclear attack would “change our world.”

Pointing to chemical weapons used by ISIS in Syria, Obama warned that “there is no doubt that if these mad men ever got their hands on a nuclear bomb or nuclear material they would certainly use it to kill as many people as possible. . . . The single most effective defense against nuclear terrorism is fully securing this material so it doesn’t fall into the wrong hands in the first place.”

The problem is that there is a cornucopia of nuclear materials out there, including former Soviet stockpiles in Russia, and unstable nations like Pakistan. The terrorists might not even have to build or steal a bomb. They just need to purchase one from a rogue, cash-starved state such as North Korea. Isn’t it comforting to know that all that money ISIS got from bootlegged oil and looted ancient artifacts could buy a ready-made bomb, like some kind of takeout meal?

Not that terrorists even need the smarts to trigger a nuclear explosion. Here’s another acronym that’s likely to make the headlines one of these days: RDD, or Radiological Dispersal Device. Merely detonating a “dirty bomb”—an explosive device that spreads radioactive materials—would cause some damage and much more panic.

What’s interesting is how the U.S. government defines an IND. A somewhat convoluted definition appeared this September in the Pentagon’s Joint Publication 3-42: Joint Explosive Ordnance Disposal, which governs explosive ordnance disposal across the U.S. armed forces. JP 3-42 defined an IND as:

a device incorporating fissile materials designed or constructed outside of an official government agency that has, appears to have, or is claimed to be a nuclear weapon that is no longer in the control of a competent authority or custodian or has been modified from its designated firing sequence.

The Federal Emergency Management Agency’s 2008 description of an IND is more straightforward:

An IND is an illicit nuclear weapon bought, stolen, or otherwise originating from a nuclear State, or a weapon fabricated by a terrorist group from illegally obtained fissile nuclear weapons material that produces a nuclear explosion. The nuclear yield achieved by an IND produces extreme heat, powerful shockwaves, and prompt radiation that would be acutely lethal for a significant distance. It also produces radioactive fallout, which may spread and deposit over very large areas. If a nuclear yield is not achieved, the result would likely resemble an RDD in which fissile weapons material was utilized.

Note that according to these definitions, an Improvised Nuclear Device is any nuclear weapon built or acquired by a nongovernmental group, even if the bomb itself was manufactured by a nation like Pakistan or Russia. In other words, what makes an IND “improvised” isn’t that it’s jury-rigged or amateurish, but rather that whoever controls it isn’t an official government agency. One wonders whether the victims of an IND would be comforted by the thought that that bomb was just an improvised one.

If there is any consolation about an IND, it’s this: there won’t be a lot of them. Every day, there is another report of an IED going off in Syria or Afghanistan or Iraq. Rest assured that there won’t be INDs going off every day. If there are, we will have a new acronym: EHS, or Extinct Human Species.