The Next South China Sea Crisis: China vs. Britain and France? 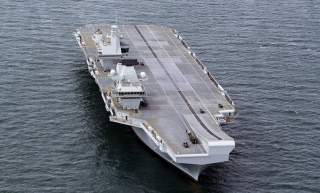 First Britain, now France. Is China on a collision course with the navies of Western Europe, as well as America?

French defense minister Florence Parly has just announced that its warships, alongside British vessels and helicopters, would sail through the South China Sea—waters claimed by China.

“Without naming China, she suggested the warships will cross into ‘territorial waters’ claimed by Beijing and envisioned a potential encounter with its military,” according to the South China Morning Post.

“At some point a stern voice intrudes into the transponder and tells us to sail away from supposedly ‘territorial waters’,” Parly stated at the annual Shangri-La Dialogue conference in Singapore. “But our commander then calmly replies that he will sail forth, because these, under international law, are indeed international waters.”

Earlier this year, a British frigate sailed through the South China Sea. More significantly, last year Britain announced that its new Queen Elizabeth-class carriers will sail there once they are completed in the early 2020s.

Also noteworthy was Parly's assertion that more European nations would be joining the freedom of navigation operations, or FONOPS, campaign. “I believe we should broaden this effort even further,” said Parly, adding that Europe was mobilizing more widely to support this endeavor and there were also German observers on board, the South China Morning Post said.

France’s showing of the flag comes as the United States and China square off over the South China Sea, of which Beijing claims around 90 percent. A series of recent incidents have highlighted tensions there, including Chinese troops and missiles deploying to islands in the sea zone, and U.S. warships and B-52 bombers entering the area.

However, the real question is whether France’s naval threat is more than symbolic. The French Navy has one twenty-five-year-old nuclear-powered aircraft carrier that has been plagued by problems since launch. The navy has about 180 vessels, including four ballistic missile submarines and three helicopter-equipped amphibious assault ships. French weaponry includes sophisticated arms such as the upgraded Exocet missile.

Yet when even the U.S. Navy is worried that its vaunted carrier battle groups might not survive an onslaught of Chinese anti-ship ballistic missiles and submarines (not to mention new Chinese aircraft carriers), it's questionable how much France can bring to the fray. While France is paying more attention to the Pacific—something of a change since Dien Bien Phu—its long-range capabilities to deploy in the Pacific are limited, and it has to guard against a Russian threat to European waters. Partnering with Britain may not help so much: the Royal Navy fears that the air defense missiles on its new aircraft carriers are too slow to stop Russian hypersonic anti-ship missiles. And China is developing its own hypersonic weapons.

Nonetheless, France has the world’s fifth-largest economy. So if France were to join the ranks of its potential adversaries, then that can't be good news for China.