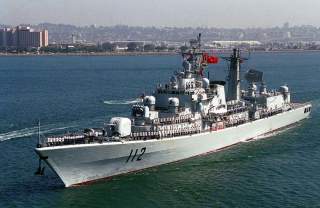 A recent Foreign Policy article argued that China’s deployment of a billion-dollar offshore oil rig into maritime territory claimed by both Vietnam and China represents a potentially dangerous escalation of tensions in the South China Sea—one signaling China’s determination to exploit energy resources that lie under disputed waters.

Over the past two decades, China has gone from being a net energy exporter to a net energy importer. Forecasts in the 2013 IEA World Energy Outlook show Chinese demand will account for 31% of global net energy demand growth between 2011 and 2035. Its energy demand in 2035 will be double that of the United States and triple that of the European Union. And China’s growing appetite for energy resources will be increasingly backed by its growing naval power—meaning it’ll have options to push the strategic envelope in the South China Sea in order to enhance its own future energy security.

The seabed around the Natuna Islands is gas-rich and falls partly within the boundaries of China’s so-called nine-dash line in the South China Sea. But it’s also a part of Indonesia’s maritime Exclusive Economic Zone (EEZ). Indonesia has asserted on a number occasions that there’s no dispute with China around the EEZ because China’s audacious claim has no basis in international law. But Beijing has simply refused to respond consistently or clearly to Jakarta’s multiple requests for clarification.

At the least, there’s a conflict over the interpretation of the 1982 UNCLOS—and the legal concept that ‘land dominates the seas’—between China and Indonesia. Jakarta’s attempts to find consensus in ASEAN over the South China Sea has rested primarily on diplomatic efforts to engineer a middle-power driven construct—known as ‘dynamic equilibrium’ (PDF)— that might moderate the growing power imbalance in Southeast Asia. Regarding Indonesia’s perspective on China’s long-term interests and role in the region, Rizal Sukma defines (PDF) Indonesia’s relationship with China in terms of ongoing ‘strategic ambiguity’.

The ambiguity that pervades the relationship is driven in part by historical anxieties. Beijing and Jakarta suspended diplomatic relations for 23 years after Suharto’s ascent to power. Their resumption in 1990 did not prevent another crisis in the relationship in 1994 over the treatment of Chinese Indonesians in North Sumatra. In 1998, during the height of the Asian Financial Crisis and Jakarta riots, Chinese Indonesians were again targeted, resulting in thousands fleeing abroad. Even though both countries are currently reaping the economic benefits of good relations, Jakarta can’t help but factor Chinese coercive practices elsewhere in the region into its strategic thinking.

Most notably, TNI chief General Moeldoko recently acknowledged that ‘[Indonesia’s] main challenges in the near future were disputes over areas of the South China Sea and border security’. As Scott Bentley recently identified in his CSIS cogitASIA article, there’s good reason to believe that this sort of rhetoric signals a shift in the TNI’s strategic priorities, at least within the military leadership.

But analysts remain divided over how much can be read into decisions to review force posture across the archipelago that will see military assets significantly bolstered at the Ranai airbase on the Natuna Islands. On that particular point, Evan Laksmana has suggested that the TNI is speaking out of kilter with the foreign ministry and the policies of the wider Indonesian establishment.

Still, on the issue of China’s growing sphere of influence in the South China Sea the foreign ministry and TNI do see eye-to-eye. Speaking in February after the implementation of China’s Air Defense Identification Zone (ADIZ) over the East China Sea, Indonesian Foreign Minister Marty Natalegawa warned, ‘we have firmly told China we will not accept a similar zone if it is adopted in the South China Sea’.

Even though both China and Indonesia currently enjoy a remarkable stint of amicable relations, tensions in the South China Sea are continuing to simmer. So Jakarta should maintain its push for clarity with an official agreement that excises the Natuna Islands EEZ from all iterations of the nine-dash line map. Bentley’s suggestion that Jakarta ought to situate its diplomatic policy within a wider strategic framework—in order to more proactively manage its maritime environment—is also a pertinent one. Future scenarios that involve Indonesia having to take steps to protect its national interests in the South China Sea are plausible.

It’s in Australia’s strategic interests that the region remains stable and that Indonesia enjoy good relations with China—albeit not at the expense of good Australian-Indonesian relations. As such, Canberra could offer diplomatic support to Jakarta for proposals that would enhance a rules-based system in the South China Sea. Expending diplomatic capital to improve the security of our nearest neighbor would be a good strategic investment.

Jack Greig is a visiting analyst at ASPI. These are his personal views. The following article first appeared in ASPI’s The Strategist publication here.