The North Korea Crisis Is Back 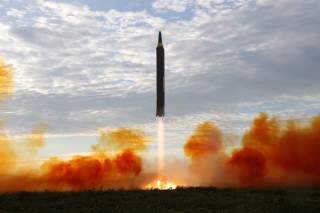 While it might have arrived at the very end of a bellicose speech to his conservative base, President Trump at CPAC today revealed the obvious: Enjoy the Olympic truce while you have it. The North Korea crisis is back—and we could very well be on the brink of war in less than two months’ time.

In calling for new and sweeping sanctions, Trump made the right call. A country that imprisons and tortures many of its citizens in a vast Gulag system and threatens to inflict a nuclear inferno on America cannot be ignored or wished away. It must be confronted. And confrontation is exactly the course Trump is adopting. Despite the North’s mendacious propaganda campaign to remake its image through countless photo ops, cheerleader squads and failed attempts at Olympic glory that the western media feasted upon, the Trump administration is showing that it will not be fooled or back down to Pyongyang and its quest for a nuclear weapon that can hit the American homeland.

But the question facing the administration is simple: can sanctions avert the prospect of war and lead to diplomatic negotiations? Or will they result in a conflict that could quickly become a military disaster, even drawing in outside powers and leading to a new world war?

Today’s actions are simply part of a series of sanctions that are designed to weaken the regimes ability to conduct commerce on the high seas and apply what many have called a “python strategy” to squeeze the regime so hard that they must eventually come to the negotiating table.

While such an act is not the largest package of sanctions ever as some in the administration are touting, their cumulative effect will hurt North Korea where it stings the most—an economy that is one-third the size of Ethiopia and less than one-percent the size of its southern brethren.

And coming on the heels of multiple UN Security Council resolutions, unilateral sanctions imposed by Washington, Seoul and Tokyo as well as a campaign of diplomatic isolation, North Korea is now reeling under a “maximum pressure” strategy that can only mean trouble for Kim Jong Un and his regime. With reports Pyongyang could be tapped out of foreign exchange and dollar reserves come October, today’s measures could essentially push North Korea into what looks like a countrywide bankruptcy.

There is also a second component to this sanctions strategy. The Trump administration likely knows deep down it that it likely won’t be able to get North Korea to surrender its nuclear weapons. However, it does know that sanctions give Washington the ability to damage Pyongyang’s economy and therefore its ability to build ever more sophisticated types of nuclear weapons and missiles. The administration might not be able to disarm Kim, but might be able to slow the North’s nuclear progress.

What Happens Next Is Key

One possibility, however remote, is that North Korea decides that the regime is under existential threat—and decides to come to the bargaining table.

In fact, the timing for such an opening might make sense if the north were to take advantage of a golden opportunity—Ivanka Trump is currently in South Korea. The Kim regime could easily reach out to the first daughter, asking for either a private meeting or something more public.

Ivanka is not just the president’s daughter but a senior adviser. Media reports constantly remind us she has the president’s ear. There might not be a better time to try and open a direct channel to one of the President’s most trusted aides.

From there, it might be possible to see some real work towards an easing of tensions. If initial talks were to go well, and the north agreed to a framework towards a plan to denuclearize the Korean peninsula—what the Trump administration is essentially demanding—there could be a way out of this imbroglio.

No one is saying such negotiations won’t be easy—and they could take years. But if the North was smart it would use this once-in-a-lifetime opportunity to see tensions stop from rising all over again.

But a different scenario is more likely. While one can’t rule out the possibility that Pyongyang decides to walk out of the games immediately and start testing missiles and nuclear weapons in a few days’ time, they will likely wait until the end of the Paralympics in mid-March to make their move.

The Kim regime will almost surely demand the permanent cancellation of the massive joint U.S.-ROK Foal Eagle military exercises that were delayed until after the Olympics, now set for the end of April. Once that does not happen—several Pentagon sources I have spoken said they thought there was no way the exercises would be cancelled—expect North Korea to push back.

With recent reports now declaring we will have exact dates for the exercises right after the conclusion of the Paralympics on March 18, the North could be testing missiles or nuclear warheads right before massive drills start, firing new ICBMs into the sky in early April.

From here, things could get far worse. North Korea has constantly threatened to test a nuclear weapon in the atmosphere and might decide now is the time to prove to the world that its nuclear arsenal is viable, similar to what China demonstrated in the 1960s when U.S. officials doubted Beijing’s atomic prowess.

To do so, Pyongyang would need to fire an ICBM deep into the South Pacific, spreading radioactive fallout through the region. If that were to happen, the Trump administration may feel it has no choice put to punch back—with a military response. There would be no point in a “bloody nose” Syria-style strike that has no impact on Kim’s nuclear or missile arsenals. Instead, Trump might well instead try to break the regimes spine instead, launching a punishing round of airstrikes in response. How China or Russia would respond is anyone’s guess.

The Olympics Détente is soon to be dead and buried—and with it the chances of a war not seen in decades will only rise.

Harry J. Kazianis serves as director of defense studies at the Center for the National Interest. You can follow him on Twitter: @Grecianformula.