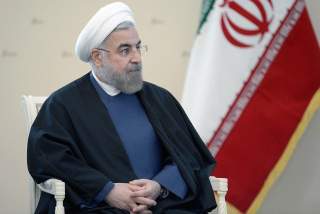 One of the contentious debates surrounding the recent nuclear deal with Iran concerns whether or not U.S. negotiators should have demanded broader shifts in Iranian foreign policy before signing any agreement. Critics of the deal argue that by providing sanctions relief before Iran curtailed its support for Hamas, Hezbollah, Houthi rebels, and Bashar al-Assad, the United States effectively agreed to bankroll Iran’s regional influence.

In response, the Obama administration has argued that by focusing on Iran’s nuclear program, U.S. negotiators were better able to avoid war while containing the most threatening of Iran’s ambitions—namely, its quest for nuclear weapons. This controversy raises a broader question: can U.S. agreements with nuclear-aspiring adversaries persist over the long term without a broader resolution of bilateral tensions?

I am currently revising a book manuscript that directly addresses this question by identifying the conditions under which nuclear aspirants comply with or defy U.S. demands for nuclear restraint. In my research, I have found that states peacefully give up their ambitions when they expect to suffer steep military or economic costs for pursuing nuclear weapons and when their security environment no longer compels them to acquire a deterrent.

These impulses can point in opposite directions, which is why negotiating with adversaries like Iran is so difficult. On the one hand, if U.S. negotiators had refused to provide sanctions relief without broader changes in Iran’s foreign policy, they would have diluted U.S. leverage over Iran’s nuclear ambitions. By threatening to maintain punishing sanctions even if Iran complied with U.S. nonproliferation demands, this negotiating strategy would have reduced Iran’s incentive to exercise nuclear restraint. But by confining the negotiations exclusively to Iran’s nuclear choices and trading sanctions relief for nuclear concessions, U.S. diplomats increased their ability to negotiate stricter controls on Iran’s facilities, and achieved a better nuclear deal than they would have otherwise.

On the other hand, by avoiding negotiations over the broader set of conflicts between the United States and Iran, U.S. diplomats constructed the nuclear deal on a shaky foundation. That is because Iranian support for actors that threaten U.S. interests and allies in the region will continue to produce tensions, and could even lead Iran into military confrontation with the United States. Anticipating this outcome, Iran has powerful incentives to violate the nuclear deal and acquire nuclear weapons as a means of deterring Washington’s use of force.

While Iran and the United States share an interest in containing ISIS and other Sunni Jihadist groups, the two countries nevertheless have a number of deep differences. For example, the United Arab Emirates’ recent decision to deploy ground forces in Yemen could escalate into a broader war between Iran and the Gulf Cooperation Council, which recently strengthened military ties with the United States, and one of whose members, Bahrain, hosts the U.S. Fifth Fleet. Likewise, dogged Iranian support for Bashar al-Assad could provoke a fight with Turkey, which is committed to Assad’s ouster, and which recently increased its cooperation with the U.S. military to fight ISIS forces in Syria. All of these potential flashpoints create long-term incentives for Iran to acquire nuclear weapons as a precautionary deterrent.

Certainly, cheating on its nonproliferation obligations would entail costs, including renewed sanctions and the prospect of U.S. strikes on its nuclear facilities. But if Iran comes to expect that confrontation with the U.S. is inevitable, then it might calculate that the benefits of a nuclear deterrent for its security outweigh the military and economic costs of violating the nuclear deal. Thus, by focusing narrowly on the nuclear issue, U.S. negotiators achieved a stricter nuclear deal, but without ensuring its long-term durability.

The Obama administration appears to have recognized the vulnerable nature of the nuclear deal, and is working to build on the negotiations by achieving a broader resolution of conflicts with Iran. Unfortunately, Ayatollah Ali Khamenei has shown little willingness to reduce support for Iran’s regional proxies or achieve a rapprochement with the United States. If Iran’s leadership continues to insist on a policy of confrontation and refuses to work toward a broader improvement of relations with Washington, the nuclear deal is likely to crumble under the weight of bilateral hostility

Conversely, the nuclear deal could provide Iran’s leaders with an economic and military stake in positive relations with the West, producing a virtuous cycle leading to greater moderation in Iran’s actions abroad. This outcome could be further spurred by a looming generational shift in Iran’s leadership, and by public support in Iran for finding common ground with the West.

Insofar as Iran demonstrates a willingness to compromise, U.S. policymakers will need to carefully weigh their interest in supporting regional allies intent on confronting Iran against the U.S. objective of encouraging Iranian nuclear restraint by reducing tensions. Ensuring the long-term viability of any nuclear agreement will require the U.S. and Iran to negotiate a process that will inevitably involve give-and-take on both sides, and which may create tensions between the United States and its traditional regional partners.

Yet if U.S. policymakers hope to prevent Iran from acquiring nuclear weapons without resorting to costly and potentially ineffective military strikes, they will need to recognize and adjust to the inherent tradeoffs in their relationship with Iran, while concurrently deterring aggressive moves by Tehran’s regional proxies. Without a broader process of rapprochement between Iran and the United States, even a perfectly constructed nuclear agreement backed by sanctions and threats of force will eventually fall apart, leading either to war with Iran or an Iran armed with nuclear weapons.

Gene Gerzhoy is a Post-Doctoral Research Fellow with the Project on Managing the Atom and the International Security Program at the Harvard Kennedy School's Belfer Center for Science and International Affairs. Beginning in the Fall, he will be working on Capitol Hill as a Congressional Fellow with the American Political Science Association.

Image: Wikimedia/Office of the Russian President