The One Big Reason Russia Might Lose a War Against America 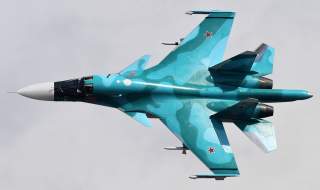 An air campaign requires a sprawling, complicated supply chain. Fire enough missiles and drop enough bombs, which require a heavy investment in materials and chemicals, and there will come a point when the logistics trail starts to strain.

Nearly 20 months into Russia’s intervention in Syria’s civil war, the strain is starting to show.

Russia has heavily relied on airpower to support Syrian dictator Bashar Al Assad. At times, the Russian air force has dropped bombs at a faster pace than the United States in Syria, benefiting from significantly shorter flight times, and being hampered by the need to rely on a greater number of unguided bombs.

The results include the deaths of more than 9,000 people including 4,000 civilians from the start of the campaign through September 2016, according to the Syrian Observatory for Human Rights, a Britain-based monitoring group.

Every bomb contains chemicals, and every rocket requires a propellant to send it from a plane or helicopter’s pylon or pod to the ground. The strikes have “bled our arsenals, according to some estimates, nearly 40 percent,” the influential Russian defense newspaper Military-Industrial Courier noted in a recent report about the Russian military’s chemical shortage. “And there is no way to quickly replenish them.”

Russia does not lack raw materials, in many cases, but the post-Soviet decline in industry has affected production in terms of quantity and quality.

Following the dissolution of the Soviet Union in December 1991, research institutes and production plants went bankrupt. They lost valuable workers and technical documents. Machinery turned into scrap metal. The Bijskij chemical plant, one of the Soviet Union’s most important ballistic powder and composite solid propellant plants, went under.

The engineering jobs at military-affiliated plants and institutes have become devalued, the newspaper notes, and have lost certain Soviet-era perks, such as housing and childcare provided for workers. More importantly, the Soviets relied on a centralized system which distributed graduates from universities into ready-made jobs. Many young Russians today prefer to go into other fields.

Only one Russian company manufactures ammonium perchlorate—a critical compound used in rocket propellants. To be fair again, there is only one company in the United States which makes it, too. However, the Russian firm, Anozit, is facing financial uncertainty, according to the newspaper.

It’s not going away, but without a steady supply of orders, plants must make costly tradeoffs, such as delaying needed refurbishment and upgrades. The biggest problem is that Russia’s plants can’t simply keep pace.

“If no action is taken, the Russian army in the near future will be left without ammunition,” the paper warned. “Tanks, ships, planes and helicopters will become a common means of transportation.”

That may be an exaggeration. And in the short-term, no one can say Russia’s air campaign isn’t achieving results. It helped stabilize the Assad regime and push back the rebels which have fought for years to try and topple him, and Russia’s presence in the country remains a major deterrent to a deeper American intervention.

However, it’s come at a cost to Russia’s military, weakening it in this one important respect. But it’s a short-term cost. The consequences are much greater, longer-term or permanent for those in Syria—on the ground.