The One Chart That Russia's Military Should Be Very Afraid Of 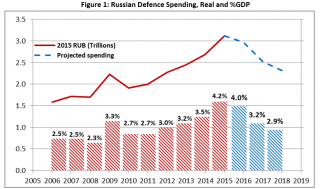 In 2014, the Russian economy faced two major setbacks: international economic sanctions following Russia’s annexation of Crimea, and a collapse in global oil prices. At the time, crude oil alone represented more than a third of Russian exports by value. The Russian economy has no doubt seen better days, but defense spending has until now largely been protected from the recent economic downturn. But that might be about to change: economic pressures are mounting and the Kremlin will likely be forced to choose between sustaining foreign operations and moving ahead with military modernization plans.

In October, Russia’s Ministry of Finance revealed forward spending estimates that showed a 12% nominal reduction in defense spending by 2018. Figure 1 shows Russia’s spending on defense (in constant 2015 currency) and as a proportion of GDP. The figures for 2009 and 2015 are particularly interesting. A full percentage point jump in 2009 is likely to have been due to operational costs of prosecuting the Russo-Georgian War in August of 2008. Similarly, the significant increase from 2014–15 would likely be due to Russian operations in Syria (and possibly Eastern Ukraine).

Based on the IMF’s current projections for Russia’s GDP, reductions will bring defense spending as a percentage of GDP down from the 2015 high of 4.2% to possibly as low as 2.9% in 2018. If those projections turn out to be accurate, Russia’s defense spending would drop to its lowest rate since 2011–12. But forecasting is always problematic, and a lot could change by 2018.

The good news for Moscow is that Russian operations in Syria have provided effective advertising for Russian military hardware. Back in March, Vladimir Putin boasted that Russian arms sales in 2015 had exceeded US$14 billion, and prospective foreign orders had reached US$56 billion. (As a caution, SIPRI’s arms transfer database, which measures the value of delivered goods, lists a 2015 exports figure of less than US$10 billion).

Figure 2 (see here) shows the last ten years of Russian arms export deliveries in constant 2015 rubles and constant 2015 US dollars. The value of the ruble relative to the US dollar collapsed in 2014–15 as sanctions and the oil crisis started to bite. Russian arms sales in 2014 and 2015 look similar in US dollars, but the value in rubles doubled over the same period.

It’s worth noting that arms imports into Russia since 2006 have consistently represented less than 1% of total defense spending. What little they did import came mostly from Ukraine, which has been a vital source of naval gas turbines for decades. Even though the value of the ruble has plummeted relative to the dollar, it’s difficult to determine how much Russia’s purchasing power in the defense market has changed, since the country makes almost all of its own hardware. If anything, the change is likely to make Russian arms cheaper on the international market and thus even more saleable.

Arms sales alone aren’t likely to improve Russia’s economic prospects in the long term, but it’s an indispensable source of revenue for the Russian government. And each sale has geopolitical implications: Russia’s main military hardware customers over the last ten years are India (US$40b in 2015 dollars, according to SIPRI), China (US$20b), Algeria (US$12b) and Vietnam (US$7.5b). Sales in the same period to Syria (US$2.5b) and Iran (US$1.5b) are noteworthy, and the easing of sanctions on Iran has already stirred talk of major new acquisitions. Sales of military aircraft made up almost half of all arms sales (45.5%), with missiles (16.6%) and air defence systems (10.1%) the next two most popular purchases by value.

It’s hard to know what—if anything—will reverse Russia’s economic misfortunes. It’s likely that Putin will seek rapprochement with the US under President Trump in an attempt to end the sanctions, though it’s anyone’s guess how successful this strategy will be. An upswing in oil prices would be a boon to Russia’s export economy. And, while there are some indications that prices are stabilizing, it may be years before prices return to pre-2014 levels.

On the other hand, if Moscow continues to conduct expensive operations in Syria, operational costs may result in further delays to new platforms. The Russian Navy’s surface fleet plans have already been set back by the lack of Ukrainian gas turbines, the air force can currently only afford twelve units of the developmental PAK-FA fighter jet, and the Russian Army’s new tanks may be delayed even further. Moscow has some hard choices to make.