The One Country Rodrigo Duterte Won't 'Separate' From Anytime Soon 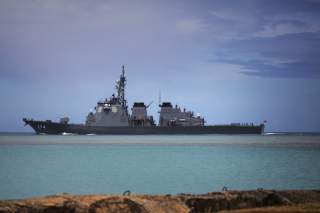 From October 18 to 21, Philippine president Rodrigo Duterte is making his first state visit to China as part of his push for an “independent” Philippine foreign policy. Although analysts have seen the trip and numerous anti-Western remarks as signs of Duterte rejecting the United States and pivoting fully toward China, the ongoing warmth of the security relationship with Japan—China’s greatest rival in East Asia—hints at a greater balancing act within Duterte’s foreign policy vision.

Less than a week before leaving for Beijing, Duterte gave an address praising Japan for its continued assistance to the Philippines, including 10 patrol ships donated to the Philippine Coast Guard. Speaking during the 115th anniversary of the Philippine Coast Guard, Duterte praised Japan as one of the biggest contributors of official development assistance to the Filipino people, and cited the aid the Japan International Cooperation Agency (JICA) provided to Davao during his time as mayor.

It is interesting that, despite Duterte’s efforts to engage China on business and to manage the tension in the South China Sea, he also sees the need to secure more ships from Japan to patrol the Philippines’ maritime territory. In front of Japanese ambassador Kazuhide Ishikawa, Duterte announced “We need ships…it is not enough, but at least we have ships to begin with. The old ones, plus the new one that has been delivered to us, would greatly help us in this endeavor.”

Duterte’s trip to China focuses on forging a new economic partnership between the two countries at a time when diplomatic tension between the Philippines and its formal treaty ally, the United States, is increasing. His working visit to Tokyo, however, scheduled for October 25 to 27, is expected to clarify how Japan will help the Philippines develop its maritime security capabilities in light of the South China Sea dispute. Despite the efforts to move closer to China, Manila finds it prudent to keep its security partnership with Japan intact and functional.

Duterte is pursuing a relatively balanced policy that gravitates closer to China while creating some diplomatic distance from the Philippines’ only strategic security ally, the United States. Regarding the former, he declared that he is open to direct bilateral negotiations with China. Duterte’s foreign secretary, Perfecto Yasay, declared “that the relationship between the two countries (China and the Philippines) is not limited to the maritime dispute. There are other areas of concern in such fields as investment, trade, and tourism and discussing them could open the doors for talks on the maritime issues.”

On the latter, Duterte has called for the withdrawal of U.S. Special Forces who are operating in Mindanao to support the Philippine military’s counterterrorism operations. He also ordered the Philippine Navy to cancel joint patrols with the U.S. Navy in the South China Sea, on the grounds that these activities could be construed by China as a provocative act and make it more difficult to peacefully resolve the territorial dispute.

The embrace of Beijing and the alienation of Washington has unsettled both the United States and Japan. Puzzled by the changes in Philippine foreign policy, the Japanese government has pushed ahead in its nuanced approach to dealing with the Philippines. A senior Japanese official said that, while Tokyo and Washington share the same goal in the Philippines, Japan takes a different approach in its relations with the Philippines because there are some things that Manila can only accept when Japan provides them. Amid Duterte’s anti-American pronouncements, Japan continues its comprehensive engagement with the Philippines.

In early August 2016, Japanese foreign minister Fumio Kishida met Duterte in Davao City where the two discussed how their countries could work together for the peaceful resolution of the South China Sea dispute on the basis of July’s arbitral tribunal ruling, which Japan considers final and legally binding on both China and the Philippines. Kishida explained to Duterte that enhancing Philippine Coast Guard and Navy capabilities in maritime security is an important pillar of his country’s assistance to the Philippines. He then informed Duterte that Japan intended to push ahead with donating patrol boats and leasing training aircraft to the Philippine Navy for maritime domain awareness.

On the sidelines of the ASEAN summit in Laos, Prime Minister Shinzo Abe and Duterte met for the first time. Abe followed up on Kishida’s announcement by saying Japan would provide two 90-meter patrol vessels (in addition to the previously-announced 10 multi-role response vessels) to boost Philippine Coast Guard search-and-rescue and fisheries protection capabilities. These two large patrol vessels have thick armor to protect the crews from shells. It is the first time for Japan to provide this type of large patrol vessel to another country. Duterte responded by expressing his appreciation, and explained to Abe that these patrol vessels will enable the Philippines to strengthen patrol in its coastal waters and will enhance Philippine presence in its exclusive economic zone. Japan’s goal is to help the Philippines improve its maritime surveillance capabilities in light of increasing Chinese activities in the South China Sea. Aware that strained Philippine-U.S. relations benefit China, Japan is strengthening its relations with the Duterte administration by fostering periodic Japan-Philippines consultations and strengthening maritime domain awareness capabilities.

Renato Cruz De Castro is a professor in the International Studies Department, De La Salle University, Manila, and the holder of the Charles Lui Chi Keung Professorial Chair in China Studies. He was the U.S. State Department ASEAN Research Fellow from the Philippines, and his expertise includes Philippine-U.S. security relations, Philippine defense and foreign policies, U.S. defense and foreign policies in East Asia, and International politics of East Asia.