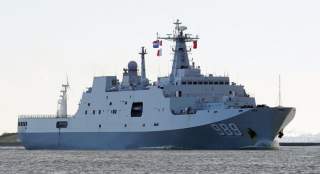 Studies of Chinese naval development have tended to focus of late on one of two possible extreme poles: a high-end fight involving missiles, fighter interceptors and submarines, or alternatively low-end “gray zone” coercion focusing on militia or coast guard units. That might leave out the crucial middle layers of Beijing’s maritime advance. It is well known that the PLA Navy has substantially improved its surface forces in recent years by deploying myriad new destroyers, frigates, and corvettes. Less well understood has been the incremental, but potentially significant improvement in China’s “gator navy”—the amphibious forces.

For decades, Chinese amphibious forces had been the butt of jokes by Western defense analysts. Why, for example, did the PLAN seem to keep around landing craft captured back in the Chinese Civil War (that had been built by the US during WWII and taken from the Nationalists)? A Chinese amphibious attack on Taiwan was derided as a “million man swim”—totally lacking in the appropriate lift capabilities. To be sure, the PLA Navy still lags far behind the U.S. Navy in amphibious warfare, but it is making rapid strides nonetheless and these steps must be tracked closely. This edition of Dragon Eye will take a closer look at a few of these recent steps—as reported in the Chinese language defense press, but not generally discussed in this forum.

Of course, Beijing’s serious intention with respect to amphibious warfare was signaled clearly a decade ago when the Type 071 amphibious attack ship or landing platform/dock (LPD) was revealed. Now, China wields four of these 25,000 ton ships that each carries 500-800 hundred troops, as many as six medium helicopters, potentially more than 60 amphibious vehicles or up to four air-cushioned landing craft. The PLAN high command has demonstrated a certain confidence in the class by dispatching these ships “to the far seas,” including for anti-piracy operations in the Gulf of Aden as early as 2010. Insofar as this ship has been widely examined, we will focus on less widely discussed innovations in the force.

One of the most curious of these “novelties” has been the unveiling in 2014 of a new, medium-sized amphibious attack ship, GY820. Described in a December 2015 issue of National Defense News [国防报] as a “new type comprehensive security ship” [新型综合保障船] this unique vessel is said to displace 2700 tons and have a length of 90 meters. Other than its ability to carry “main battle tanks” [主战坦克] along with a helicopter landing deck on the stern, little is said about its actual mission or combat capabilities, other than that it has been dispatched to carry supplies to the South China Sea. Of course, the most curious attribute of this medium-sized ship is that it is very clearly designated as a “ground forces ship” [陆军船艇]. The most cynical analyst could easily explain the ship’s appearance as a way for China’s ground forces to receive some of the prestige (and largesse) that might accompany operational involvement in the various “hot” maritime disputes. But a functional interpretation is also conceivable. It might be that the Navy is primarily tasked with seizing beaches, while the ground forces have been directed to concentrate on logistical throughput once the beachhead is established. In that sense, the ship could actually herald an enlarged and much more capable Chinese amphibious force that is truly “joint.”

Another significant step toward joint amphibious operations occurred in 2014 when a ground forces Z-10 attack helicopter (similar to the US AH-64 Apache) undertook test operations from the amphibious attack ship, hull 913. A colorful graphic commemorating the test graced the cover of the September 2014 issue of Ordnance Industry Science Technology [兵工科技], but pictures inside the issue confirm that the tests occurred. A helicopter specialist interviewed in that edition explained that such a “specialized attack helicopter … is not appropriate for naval warfare … and so generally do not go aboard ships.” However, a further hint of this approach was an analysis published in the March 2016 edition of Shipborne Weaponry [舰载武器] that offered: “… having a large number of attack helicopters can vastly increase the fire support capabilities of amphibious forces.”

To be sure, the amphibious craft making the most headlines in China over the last few years has been the transfer and indigenization of the Ukrainian Zubr-class large air cushioned attack craft. This addition to the Chinese order of battle has no doubt occasioned some excitement, for example a reporter from Navy Today [当代海军] gushed about the speed and stability of the “Bison” [牛野] craft. However, a description of the new vessel from the naval magazine Naval and Merchant Ships [舰船知识] May 2014 edition gave the new capability surprisingly low marks. That report cited high maintenance costs, low stealth and short range as significant problems with the craft, so that the Zubr “does not form an ideal first choice platform for amphibious operations.” [不是理想的首选登陆载具].

Much less well known but potentially more significant could be the small Type 074A landing craft, which was discussed in some detail in a spring 2016 issue of Ordnance Industry Science Technology [兵工科技]. This catamaran [双首舰体构] design allows for greater stability, stealth, ease of loading and unloading, and decreased draft. The craft can apparently load three Type 96 main battle tanks with 70 soldiers, or six Type 63 amphibious fighting vehicles or 250 armed troops. Fully loaded, the vessel’s displacement is 800 tons and its top speed is reported at 18 knots. Undoubtedly, this small and relatively cheap boat could become the ultimate workhorse for the PLA Navy if it were called upon to “… undertake a massive sea crossing for the amphibious battle …” [实施超大规模渡海登陆作战].

The developments above suggest a deliberate, innovative, yet moderate pace of amphibious warfare development. Undoubtedly, China could have far more than four modern Type 071 LPDs if it wished. There will, of course, be “coming attractions,” including but likely not limited to a class of Landing Platform Helicopters (LPH). As the analysis cited above from Shipborne Weaponry [舰载武器] suggests, China’s LPH could well be considerably larger than the much discussed French-built Mistral-class. That source suggests China’s LPH will need to carry about 40 helicopters, including the very large heavy lift helicopters that China is currently developing with Russia. This present article has, moreover, not even taken up the news of an enlarged Chinese Marine Corps, invigorated special forces development, or the possibility of the Chinese Navy wielding vertical takeoff or tilt rotor aircraft in the coming years.

Even as presently configured, the improved Chinese amphibious force could be a decisive factor within a conflict scenario on China’s periphery. One could imagine (when thinking the unthinkable) a series of small-scale amphibious lightning style attacks that seek to secure various key passages for egress through the “first island chain,” thus enabling China’s submarine force to operate more effectively in the wider Pacific during the critical opening phases of a conflict. Such moves could have the disturbing impact of prompting escalation from a small war to a large war, of course.

But on the whole, China’s amphibious forces are most likely to continue to serve primarily as a deterrent against Taiwan nationalists. To be sure, Western defense analysts should continue to closely watch production of China’s force of large amphibious attack ships, but they should not neglect nifty smaller designs such as 074A discussed above that could, like an ant colony, multiply quickly and have significant strategic effects.

Nevertheless, Chinese leaders have thus far exercised a certain moderation in developing its amphibious forces. Taking this a step further, Beijing leaders might yet succeed in turning this caution into genuine diplomatic gains by convincing its nervous neighbors that this restraint reflects its generally benign intentions over the long term. After all, pocketing a reef here and there does not exactly constitute an all-out invasion of a neighbor’s home islands with all the amphibious warfare kit that such radical objectives would entail. Here lies a distinction that matters fundamentally for Asia-Pacific security. Thus, China could send a potent and stabilizing message to the region by exercising continued restraint over the development of enhanced amphibious warfare capabilities.