The Only Way Taiwan Can Deter China 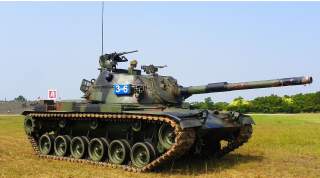 President Tsai Ing-wen of Taiwan keeps repeating that her government will maintain the status quo with China. But faced with Beijing’s growing military presence and the absence of a well-defined East-Asia policy in Washington under President Donald Trump, Tsai and her national-security team have been forced to consider costly countermeasures.

Cross-strait relations between Taiwan and China have been unsettled since Tsai, chairwoman of the pro-independence Democratic Progressive Party, took office last May. Beijing is irked by her refusal to agree to the 1992 consensus between the Chinese government and the Kuomintang (KMT) — namely that there is one China, even if each side has a different interpretation of what that means. Beijing sees Taipei as a rebel province and does not recognize its de-facto statehood, which dates from 1949 when the KMT lost the Chinese civil war to the Communist Party and fled to the island.

The Taiwanese ministry of national defense argues that about 1,500 Chinese missiles are aimed at the island. Taipei’s defense minister Feng Shih-kuan emphasized last week that China had deployed a number of highly accurate Dong Feng-16 (DF-16) short-to-medium-range ballistic missiles on coastal regions. The DF-16 has a range of 1,000 kilometers and, in addition to Taiwan, can strike parts of Japan and the Philippines.

The combination of DF-16s and DF-21C/D anti-ship medium-range ballistic missiles would allow China to compromise the island nation’s defenses with relative ease, notably if Beijing launched multiple attacks. In addition to the missile threat from the mainland, Taipei counted six drills and training missions by China’s air and naval forces in the recent months, including maneuvers by Beijing’s only aircraft carrier, Liaoning.

With security deteriorating across the Strait of Taiwan, Taipei plans to build its first locally commissioned submarines within a decade. The vessels will be built by Taiwanese shipbuilder CSBC Corp. in cooperation with the National Chung-Shan Institute of Science and Technology. Both entities signed a memorandum of understanding with the Taiwanese navy at a ceremony last week, emphasizing the importance of the submarine program in building up a home-grown defense industry.

Taiwan’s difficulty in buying submarines abroad is likely the key reason behind Tsai’s decision to boost the country’s defense-industrial sector. Foreign military suppliers, including the United States, have always been reluctant to sell sophisticated weaponry like submarines to Taipei — a move that would anger China.

Apart from submarines, Taiwan is also building fighter jets and warships and strengthening its electronic and cyber defenses against China. But the real breakthrough would be the development of an effective missile deterrent. It is said that Taiwan aims to improve its home-built Tien Chien air-to-air missile, its Tien Kung surface-to-air missile and its Hsiung-Feng anti-ship missile, focusing on their firing range. Taipei would also develop offensive land-attack cruise missiles.

During a March 16 hearing of the foreign affairs and national defense committee of the Taiwanese parliament, Lieutenant-General Chiang Chen-chung, responsible for operations planning at the defense ministry, said the country’s missiles could hit targets 1,500 kilometers away on mainland China.

It remains to be seen whether Taiwan can afford such an increase in military spending amid current budget restrictions. Defense Minister Feng’s recent Quadrennial Defense Review said that Taiwan plans to raise defense spending to 3% of GDP in 2018, up from 2% this year and the highest percentage since 1999.

From 2012 to 2016, Taiwan imported US$2.8 billion worth of armaments, making it the sixth-largest buyer in Asia-Pacific after China, Australia, Vietnam, South Korea and Indonesia, according to the Stockholm International Peace Research Institute. Sources claim the Trump administration is preparing an arms-sale deal with Taiwan that would include advanced multiple-rocket systems and anti-ship missiles. It would top $1-billion deal that the administration of former president Barack Obama scrapped in December at the end of his presidency.

A new strategy of multiple deterrence:

Arms acquisitions and the upgrading of the domestic defense industry will have to dovetail with a new military doctrine planned by Taipei’s strategists, who must cope with a manpower shortage and financial constraints. In early March, the defense minister announced that Taiwan would adopt a strategy of “multiple deterrence” to prevent enemy forces (i.e. China) from entering its territory by air, land or sea.

In Feng’s words, the Taiwanese armed forces will have to develop asymmetrical tactics to push the enemy into “multi-dilemmas.” The deployment of Patriot Advanced Capability-3 (PAC-3) missile batteries on Taiwan’s east coast is part of this strategy, as well as the reinforcement of early-warning systems, the improvement of cyber capabilities and the development of smart sea mines and unmanned aerial vehicles for combat and reconnaissance missions.

But new weaponry and strategic doctrines alone cannot help Taiwan close the military gap with China. And these moves will end up worsening cross-strait relations. To deter China, and protect its territory, Taiwan needs America’s active support, both in political and defense terms. But President Tsai’s push to develop and produce Taiwan’s own arms suggests she is wary of Trump’s real commitment to the country’s security.