The Only Way the U.S. Navy Will Get Bigger: Get 'Smaller' 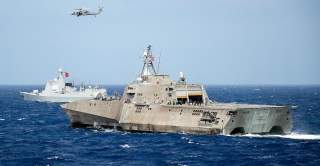 There’s been talk lately about so-called plans for the US Navy battle force inventory to return to 350 vessels. President-elect Trump has pledged to begin the biggest naval build-up since the 1980s. The USN inventory was 271 battle-force vessels in 2015, well below its current target of 308 (which is currently under review).

A target of 350 is ambitious, and would require reversing a steady trend established over the past quarter century. The fleet declined markedly after the end of the Cold War, and now has 299 fewer vessels than in 1990. Most of that reduction happened in the 1990s as part of the ‘peace dividend’, but financial pressures have continued to whittle away at fleet strength, which has lost 66 vessels since 2000. (The source data is here.) Adding another 80 vessels won’t be easy. The ‘Reagan build-up’, which was intended to produce a 600 ship navy (but didn’t), added just 40 over the 1980s—just in time for the big post-Cold War cuts.

And it’s not like we haven’t seen plans for a larger fleet before. As usual, Augustine was here before us. The figure here appears in his 1983 book on US military procurement. It shows a decade’s worth of plans for the USN fleet. Each revision is less optimistic (in terms of both numbers and time) than the previous. Under the heading ‘reality sets in’, Augustine wryly observes:

“For many years official projections have shown an eventual increase in the size of the fleet. For many years this has not been happening”.

It’s not hard to understand the reasons for this phenomenon. Like any Navy, the USN will always want more hulls in the water, because it most values command at sea and (as a bonus) because it will be able to do more. The figure of 350 isn’t arbitrary. As a recent Congressional Research Service (CRS) paper shows, the USN is currently doing a force structure assessment that’s likely to revise the target fleet size up from 308 to something around 350 (the CRS notional force structure is 349).

With a hawkish new administration in place, the USN might find it easier to gain traction for those ambitions. The coincidence of Trump’s goal and the USN’s thinking hints that beltway briefings have already taken place. But selling the idea to a new president and Secretary of Defense—and to members of Congress with defense industry in their district—is the easy part. A fleet can’t be grown overnight, and there’s plenty of time (as Augustine’s observation shows) for enthusiasm to wane. Sustainably building up the USN is the work of many Administrations. CRS notes that reaching:

"… and maintaining the notional 349-ship force structure might require adding a total of 45 to 58 ships to the Navy’s FY2017 30-year shipbuilding plan, or an average of about 1.5 to 1.9 additional ships per year over the 30-year period. Using current procurement costs for Navy ships, procuring these additional 45 to 58 ships might require an average of roughly $3.5 billion to $4.0 billion per year in additional shipbuilding funding over the 30-year period."

In other words, the plan requires successive US governments to keep the faith (and the funding) for 30 years, when there’ll be many other budgetary pressures and an obviously restless electorate to placate. That’s a big ask. And historical data shows that the rising unit cost of new vessels is driving fleet size downwards.

The only other alternative is to find a way to build faster or cheaper or, preferably, both. And that would mean shifting emphasis to vessel types that could be delivered not long after the initial burst of enthusiasm. Adding numbers to vessel types on existing production lines would be a start. That would allow for economies of scale, so additional Virginia-class submarines or Arleigh Burke-class destroyers would make sense. But neither is cheap—around $2 billion apiece in procurement, and at least as much again over the next 20 years.

And while the USN would love to have more Virginia-class submarines, its current inventory of large surface combatants isn’t far from its requirement (84 versus 88). According to a Heritage Foundation analysis, the USN’s big shortfall is in small surface combatants—having only 17 against a requirement for 52. Smaller vessels lack the punch of larger ones, but can be bought in larger numbers. And having more vessels means being able to deploy simultaneously in many places, which is a boon for missions such as reconnaissance or anti-submarine warfare.

A wish for more small vessels has a good pedigree. Lord Nelson famously said that ‘was I to die this moment, “want of frigates” would be found stamped on my heart’. (Somewhat less famously, I’ve learned to love the corvette.) The USN probably won’t think this way—it seems especially attached to its capable big ships. But if it wants to cash in on political good will, it could do worse than rebuild its frigate arm.

Footnote: I’m not the only one thinking along these lines.