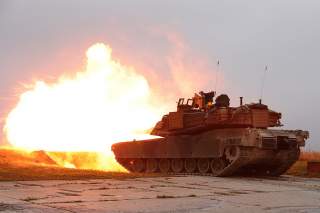 The second reason for détente’s collapse was the resurgence of hardline anti-Soviet sentiment as a political force in the United States. Strident anti-communism among U.S. political and military leaders dated back to the beginning of the Cold War and was embodied by individuals such as Arizona senator and 1964 GOP presidential candidate Barry Goldwater, a man who once called for the United States to completely withdraw diplomatic recognition of the USSR.

But conservative hawks, crippled by Goldwater’s defeat and, even more significantly, by the disastrous war in Vietnam, found themselves exiled from mainstream American politics for a time. By the second half of the 1970s, however, disillusionment with détente and concerns about the Soviet buildup facilitated the emergence of a new, post-Vietnam strain of right wing foreign policy beliefs.

The hawks viewed the Soviet Union in explicitly Manichean terms. The USSR’s goal, in their minds, was nothing short of global conquest. It was not a normal nation-state led by rational leaders, they claimed, but a moral evil that the United States had to confront anywhere and everywhere in order to protect itself and other free nations from destruction. They saw détente as a carefully planned effort by Moscow to lull U.S. leaders into complacency while the USSR grew more and more powerful.

One of the most prominent hawks was Richard Pipes, a professor of Russian history at Harvard University. In 1976, Pipes led a team of anti-détente conservatives commissioned by the president’s Foreign Intelligence Advisory Board to critique the CIA’s assessments of the Soviet Union.

Unsurprisingly, this group, which became informally known as “Team B,” produced a report that charged that the American intelligence community was gravely underestimating both the size of the Soviet buildup and the scope of its ambitions. It concluded that “all the evidence points to an undeviating Soviet commitment to what is euphemistically called ‘the worldwide triumph of socialism’ but in fact connotes global Soviet hegemony.”

Team B’s assessment was released to the public shortly after it was completed, and its contents ended up serving as a blueprint for détente’s growing number of critics who argued that the U.S. was destined to lose the Cold War if it did not adopt a more adversarial approach to the Soviet Union. They pointed to the Soviet buildup and the USSR’s increasing involvement in Third World countries such as Angola, Yemen and Ethiopia as evidence of its expansionism.

In truth, the alarmism of the right overlooked a number of important facts. It was true that the Soviets were strengthening their military, but this effort appeared to be a response to the U.S. buildup of a decade earlier. Moreover, one quarter of Soviet ground and air power was deployed opposite China rather than the West. U.S. intelligence indicated that morale was poor among Soviet troops and that the Red Army was struggling to address widespread drunkenness among its soldiers.

By the late 1970s it was also clear that the Soviet economy, already vastly smaller than that of the United States, was in a state of long-term decline, as was the size of its labor force.

There was more. Total defense spending by the NATO alliance exceeded that of the Warsaw Pact nations, many of which Moscow considered politically and militarily unreliable. While Soviet strategic nuclear forces were growing more powerful, they remained numerically and technologically inferior to those of the United States, most of which were carried by invulnerable ballistic missile submarines. The United States had also begun to develop an array of new, advanced weapons such as the MX missile, the M-1 tank and precision-guided munitions whose sophistication the Soviets could not match.

Nevertheless, these two factors, the Soviet buildup and the reemergence of anti-Soviet hardliners, had the effect of shifting the U.S. foreign policy debate significantly to the right. By the second half of the 1970s, the hawks had all but taken control of the Republican party, at least in terms of its approach to international affairs. However, many moderate and conservative Democrats were also calling for greater U.S. military spending and a tougher stance toward the USSR.

Politically, the hawks directed their anger at the Carter administration, even though the détente policies they loathed had begun under Pres. Richard Nixon. After taking office in January 1977, Carter quickly developed a reputation as an indecisive leader whose foreign policy was disjointed at best. He had greatly upset conservatives by persuading the Senate to ratify a treaty turning control of the Panama Canal over to the Panamanian government and then canceling production of both the neutron bomb and the new B-1 strategic bomber.

In May 1978, all 38 members of the Senate Republican caucus released a public statement that criticized Carter for “compromising America’s ability to defend itself.”

“In 15 short months of incoherence, inconsistency and ineptitude, our foreign policy and national security objectives are confused and we are being challenged around the globe by Soviet arrogance,” it read.

Eight months later, a group of national Republican leaders issued a subsequent statement that argued that “the Carter administration is responsible for and presiding over the decay of American influence and the decline of American military power.”

Polls indicated that these attacks were having an impact on popular opinion. A New York Times/CBS News survey in June 1979 found that 43 percent of respondents agreed with the assertion that the United States was “not as strong” as the USSR. Thirty percent were of the view that the two superpowers were equally powerful while only 11 percent said that the United States was stronger.

In terms of policy, the hawks’ primary objective was the defeat of the SALT II treaty. Efforts to negotiate a follow-on agreement to SALT I had been underway for years, and details of the new accord were finalized in the spring of 1979. The agreement was long and complicated, but its most important provision was to limit the United States and USSR each to a total of 2,250 nuclear delivery vehicles – ICBMs, SLBMs and strategic bombers.

Those on the right expressed opposition to the treaty even before negotiations were completed. Some opponents of SALT II voiced specific criticisms of the agreement, such as its failure to limit the size of the Soviet fleet of medium-range Backfire bombers. For the most part, however, hawks opposed it because they saw it as a form of appeasement, with some explicitly comparing it to Neville Chamberlain’s 1938 Munich agreement with Hitler.

Two months before it was finalized, a group of retired military officers released a 62-page report denouncing SALT II as an “act of phased surrender” to the Soviet Union. In their view, the most important reason for rejecting the agreement was that it served as “a symbol of defeatist policies which have led to phased surrender by the United States as it retreats around the world in the face of Soviet aggression.”

It was against this backdrop that the 1979 imbroglio over the Soviet brigade in Cuba took place. When its presence was made public, conservatives pounced. They argued that the USSR’s decision to deploy troops so close to American shores was further evidence, if any was needed, of the Soviet Union’s aggressive intentions.

Sen. Henry “Scoop” Jackson, a Democrat from Washington state and one of the nation’s most outspoken hawks, charged that the brigade’s deployment to Cuba “is not an isolated event.” Rather, it represented “a most dramatic example of a pattern of Soviet and Cuban behavior which is hostile to the interests of the United States, its friends and allies.”

Conservatives also blamed the situation on Carter’s weak leadership, even though the evidence indicated that the brigade was already there when he took office. “There is no doubt in my mind [that] this administration and its policies have been instrumental in placing us in the situation we find ourselves today,” Republican senator Strom Thurmond said.

Many unfavorably compared Carter to Pres. John F. Kennedy, who had — in the popular narrative — stood firm against Nikita Khrushchev during the 1962 Cuban Missile Crisis and forced the Soviet Union to remove its missiles.

Yet the two situations were hardly analogous. Even the most strident anti-Soviet hardliners acknowledged that the relatively small number of Red Army troops in Cuba posed no military threat to the United States. It was also true that the U.S. maintained a force 4,700 troops in Turkey, a nation that bordered the USSR, as well as 2,200 American military personnel at the Guantanamo Bay naval base located in Cuba itself.

From the beginning, the brigade controversy became linked to the Senate’s consideration of SALT II, despite the Carter administration’s protestations that the two matters were unrelated. Church, the chairman of the Senate’s Foreign Relations Committee, stated a few days after the brigade’s discovery was announced that there was “no likelihood whatever” that the Senate would ratify SALT II until the unit was removed.

Sen. Russell Long, a key moderate Democrat from Louisiana, announced a few days later that he would vote against ratification, citing the Soviet troops in Cuba as evidence that the USSR was acting in bad faith. A number of senators who were undecided about SALT II indicated that it would be hard for them to support the treaty unless the Cuba issue was satisfactorily resolved.