The Paradox of a European Army: A Force That Won't Fight 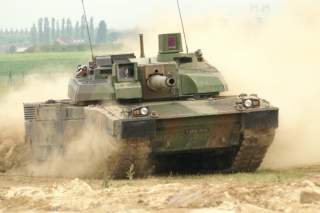 In the past month, the real specter of a European Union-controlled army has finally appeared. At his European State of the Union address in Strasbourg on September 14th, European Commission President Jean-Claude Juncker declared that Europe needs to “toughen up.” He proposed that Europe create a single headquarters for military operations, and consider common military forces one of the aims of the “ever closer union” which is the EU’s longstanding goal. The governments of Europe’s largest military powers—France, Italy, and Germany—have publicly expressed support, and added proposals for a single EU military research budget in the name of efficiency, among others.

The idea is not a new one. Sir Winston Churchill made the first post-war proposal for a “European army subject to proper European democratic control” in 1950. His proposal for a so-called European Defence Community was eventually rejected by the French Parliament and mostly forgotten, but its failure was cited as a key reason to create the European Common Market in 1957, which morphed into the European Union in 1993. Ever since, official desire for European military forces has never totally flowed, and it ebbed in 2015 as the refugee crisis flooded into Europe. There has been opposition: the United Kingdom, which jealously guards its independent military might, killed a plan to form a European air force three years ago and has promised to block this plan temporarily. But Britain is now on the inexorable path out of the EU, and a post-Brexit craze for “more Europe” is sweeping Brussels. Juncker’s proposal is an unsurprising part of that craze.

In announcing Germany’s vision for European defense cooperation, German Foreign Secretary Ursula von der Leyden said expanding it is “what the Americans expect us to do.” Should it be, or should be support our British allies in opposing it? The quiet birth of a European army could easily escape most trans-Atlantic attention. It must not. 21 of the 27 EU member states are American allies in NATO, and America will remain the ultimate guarantor of European freedom for the foreseeable future. There is no better time to influence institutions than at their creation, and as the world’s preeminent military power and their ally, we certainly owe our European allies honest advice, even if developing it means asking hard questions.

The foremost question is: what political end will a European army serve, and who will define it? The EU’s 2016 “Global Strategy,” emphasized cooperation with NATO, and European leaders have insisted an EU military force would complement the alliance. The problem with this vision of a twin to NATO is that five EU member states have policies of neutrality. Probably, none will participate in the strictly voluntary EU force, but since the EU’s pseudo-constitutional Treaty of Lisbon requires member states make unanimous decision on security and defense, they cannot escape being its master. Unless they ditch their neutrality, the EU army will be the ultimate paradox: an army that cannot fight wars. It will be free to engage in peace-keeping, as EU-sanctioned, member state-provided forces have done in the past, but war, including collective defensive war, will be out of the question. Even in an age where the definition of “war” is fuzzy, this is boggling. What is the point of an army that cannot fight in its own defense under its own flag?

The cynical explanation for this is that EU leaders are using a policy of creative ambiguity to quietly implement changes that will eventually force Europe’s neutral states to participate in collective defense à la NATO. The EU treaty repeatedly states that Europe “might” one day have a common defense of its own, and vaguely asserting it now does can make common defense materialize without tedious negotiations and constitutional changes. Many Europeans will take this conspiratorial view; it is hard to deny, as EU institutions are notoriously opaque. More likely, though, EU leaders are simply doing what they think is right, and what is easy, without worrying too much about the details. EU defense was actually low-hanging fruit for them: precisely because neutral EU members must be given an opt-out, these policies will be implemented by agreements among member states as “permanent structured cooperation,” without arduous treaty re-negations.

Inattention to detail, however, is a grave military sin. EU leaders consider the forces multi-national “European-ness” a prima facie virtue. In practice, the multi-nationality of EU forces will likely be their Achilles heel. As NATO has learned during more than a decade in Afghanistan, multi-national forces struggle to fight as one unit when different political objectives brought them together. Brussels’ Kafkaesque institutions are so far unable to build coherent, specific strategies that can guide multi-national operations—or, for that matter, any strategies at all. The EU has had two multi-national “battle groups” for a decade, and every time one state has proposed deploying them for peacekeeping missions, another has shot the idea down.

The creation of an EU army might also prove to be a harbinger of a significant diminution of the military ambition of the EU member states, with the possible exception of France and Germany who have promised (but not yet spent) larger defense budgets and forces, and states bordering Russia. So far, EU leaders’ main point in favor of creating EU forces is not that it will give Europe more military power, but that they will be able to take advantage of economies that will allow Europeans to spend less on the forces they maintain, echoing NATO’s own incessant “smart defense” rhetoric. If Europe’s preeminent military force will be limited to peacekeeping operations, they will not need to maintain many. European defense budgets have slowly fallen since the end of the Cold War, and since the financial crisis, actual European military capabilities have been slashed to almost nothing. It is shocking to count how few fighter planes, infantry battalions, and warships European powers maintain. If what few remain are trapped in a paradoxical political scheme in which their only utility is armed humanitarianism, they will probably have no hope of reinforcement. Indirectly, that will put NATO—and the American guarantee of European peace—at risk.

T.S. Allen in an officer in the United States Army currently serving in the Republic of Korea. He is a graduate of the United States Military Academy at West Point and holds an MA in War Studies from King’s College London, where he studied coalition warfare and European security cooperation. The views expressed in his work are his own and do not reflect the position of the Army, the Department of Defense, or any other part of the United States Government. Contact him on Twitter @TS_Allen.