Is the Paris Agreement Toothless? 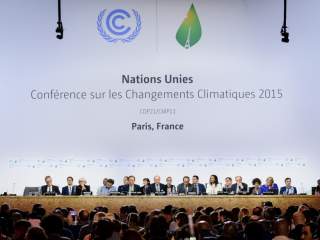 Is the Paris agreement toothless?

The countries of the world seemed to sigh with collective relief when the Paris climate change agreement was finalized. After years of toil, nearly 200 countries agreed to ratchet up action over time to achieve a net-zero-emissions global economy.

Yet, no sooner was the ink dry than discussion began about whether the deal had enough 'teeth' to achieve its goals. The national targets under the agreement aren't legally binding, critics said. In fact, the Paris agreement has been viewed with everything from caution to outright cynicism. To an extent, this is understandable. What governments say is not always matched by their actions. And Australia is a case in point.

Take the announcement of our Government joining 'the Coalition for High Ambition' in Paris. Convened by the Marshall Islands, this group includes the United States, EU, Brazil and smaller countries from Africa, Latin America, Asia and other small island states. Among other things, it supports a goal in the Paris agreement to limit global warming to less than 1.5°C by the end of century.

For low-lying island nations already battling rising sea levels, like the Marshall Islands, this target is a matter of survival. Yet if other countries adopted Australia's current emissions targets, we would see the world warm by 3-4°C. It is a clear disconnect between words and actions. But Australia is not alone in this. Nearly all countries need to lift targets and policies if we are to achieve a less than 2°C or 1.5°C goal.

So, does the criticism that emissions targets aren't legally binding actually matter?

If we are to achieve a reduction in the emissions entering the planet's atmosphere, it will be done through countries taking effective domestic action, not by the mere existence of an international agreement.

The Paris agreement, firstly, requires that every five years all countries set an emissions reduction target that is stronger than the last (with some exceptions for the world's nations that are poorest and the most vulnerable to the impacts of climate change). Importantly, these targets are to be justified against the less than 2ºC or 1.5°C goals that the Marshall Islands and others need for survival. Secondly, the Paris agreement binds countries to implement domestic policies to achieve that target.

The point is that legally binding targets don't necessarily equal effectiveness. It is participation in the agreement, through action, that is vital. After all, the most binding agreement is useless if the United States, China, India and other major emitters don't participate.

Recent history shows us that, just because a commitment is not binding, it does not necessarily follow that countries won't act or participate.

Under the 2009 Copenhagen Accord, for example, it was voluntary for countries to put forward 2020 emissions targets. Yet, since then, the number of domestic laws to control pollution around the world has more than doubled from around 420 to 800. According to the World Bank, about 40 nations have begun to make emitting companies pay for their carbon pollution. And the number of carbon pricing laws across the world has nearly doubled since 2012.

This all happened with just over 10 percent of global emissions being covered by internationally binding emissions commitments under the Kyoto Protocol. It was not driven by fear of sanction from other countries. It was driven by the fact that major economies, national security agencies, central bankers, institutional investors, major global businesses and many others now see climate change, and the global response to it, as a major strategic issue that must be managed.

This is not to say we shouldn't hold countries accountable for their actions. The Paris agreement requires that countries regularly review each others' targets and actions towards achieving net-zero emissions. It also contains binding systems to promote transparency (eg. expert international teams will review biannual emissions reports from each country).

The Paris agreement is not perfect, but to judge it by whether or not it is legally binding misses the point. Post Paris, the test of any nation's commitment to climate change is now two-fold. First, do its pollution-reduction targets help achieve the net-zero-emissions goals of the Paris agreement? By assessing one another on this every five years, international pressure will result in action. Second and most importantly, do its domestic laws make major emitters responsible for the pollution they cause?

If the nations of the world can answer 'yes' to both these questions, it should deliver us, and nations like the Marshall Islands, the climate action we all need.

Erwin Jackson is deputy CEO of The Climate Institute. This article first appeared in the Interpreter.