The Party’s Over: Prohibitionary Politics in Ukraine 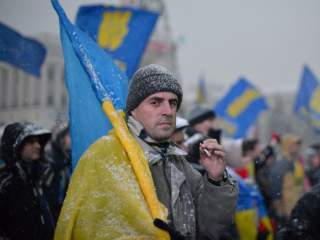 In a news story that skirted the dragnet of public attention, the Kiev District’s administration court on December 16 announced that it was placing a ban on the Communist Party of Ukraine (KPU). The goal of both Poroshenko and his besieged prime minister, Arseniy Yatsenyuk, is to move their nation into some sort of alignment with the European Union by 2020, by which point Brussels will expect a healthy degree of liberalization. But the outright banning of a political party—however discordant such a party may be to the understandable Ukrainian desire to seek a newer, post-Soviet world—is a curiously illiberal way of achieving this goal.

What sort of threat did the KPU pose that was potent enough to jeopardize relations with the EU?  It appears that heightened tensions have led to the perception of the KPU as a potential fifth column, an organization that, due to its historical ties, is perhaps too cozy with Russia, too virulently anti-West. According to the Ministry of Justice—headed by a Yatsenyuk appointee and which originally brought suit against the KPU – the party’s alleged campaign of “incitement of racial hatred,” “encroachment of human rights and freedoms,” and “amending the constitution by force” is sufficient grounds for its prohibition.  This followed on the heels of a similar move in May by the government to detoxify public fora of Soviet-era public art and symbols.

Yet to identify the KPU as the cause of Ukraine’s current woe is at once to overestimate their power and to misstate their operating premise.  Even before the current ban the party was already hemorrhaging voters.  From an all-time high of 23.1 percent of the vote in the presidential election of 1998, the KPU’s perpetual standard-bearer, Petro Symonenko, saw his support atrophy to a floor of 1.5 percent two years ago. Similarly, the contingent of KPU votaries in the 450-seat Rada, once 121 strong in 1998, dropped to twenty-one in 2011.  Clearly no one with any fervent desire of exacting radical change, even before the KPU’s prohibition, would have selected it as their vehicle of choice.

The KPU’s platform is, unsurprisingly, based on Marx and Lenin’s vision of an international classless society brought about by the inevitable fall of capitalism.  It follows that the party’s disdain for Ukrainian nationalism is not specifically a Ukrainian objection, but borne of the very idea of nationalism as antithetical to the ultimate goal of a borderless communist society.  The KPU is an equal-opportunity rejecter of “the ideological basis of fascism.” Thus, any support it has for Russia would be limited to Russia’s Communist Party in an effort to promote shared goals – certainly not to bolster Russian (read: Putinist) chauvinism.

In an ironic twist, the KPU, the supposed defiler of “human rights and freedoms,” has appealed to the European Court of Human Rights in hopes of reversing the Kiev court’s decision and restoring its right to exist.  How would it not be the height of hypocrisy for the EU to scold Ukrainians for deigning to leave their own version of the totalitarian past by the parliamentary wayside, especially considering it was not more than seventy-one years ago when both Germanys—now united and the very linchpin of the European project—codified banning the political party of the previous German regime in response to its unmentionable crimes?

Put simply, the two circumstances diverged considerably. The Allies could hardly have known in the spring of 1945 that a reunited Germany would eventually become an economic powerhouse and a dominant force in a democratic Europe. A struggle against the creeping specter of a fascist fifth column seemed far more likely, creating an immediate need to denazify. But twenty years of a defanged and decidedly un-revolutionary KPU has not produced a threat as exigent as Nazism’s potential resurgence; Germany and other members of the EU have every right to criticize and to expect more liberal behavior from a nation aspiring to their ranks.

The only logical explanation for attempts to cleanse Ukraine of communist politics, then, is to create an easy scapegoat for the problems the country faces—an “other” onto which the government can project its fears of instability.  And indeed, the future of Ukraine is cause for concern. Its economic wherewithal is in the hands of the International Monetary Fund, its government is more fractured than ever, and the tumult in Eastern Ukraine seems endless.  In some cases, Ukraine is even reverting to Soviet-style censorship as a means to “restore public faith in the work of the state bodies and officials,” an effort surely not conducive to building closer ties with Western democracies.  The last thing Ukrainians need from their already-questionable leadership is to be pointed in the direction of a canard, blaming the KPU for its troubles while much more pressing problems fester beneath the surface.

Matthew Pennekamp and Rachel Bauman are resident junior fellows at the Center for the National Interest.