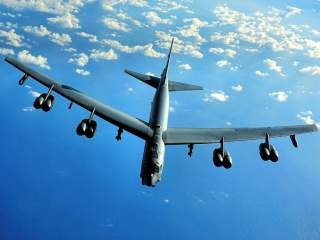 Earlier this week, U.S. defense secretary Ashton Carter unveiled a heretofore-undisclosed project called the arsenal plane. While it was well known that the U.S. Air Force was working on a stealthy, penetrating Long Range Strike-Bomber (LRS-B), the service had not mentioned a separate effort to build what amounts to a flying missile magazine.

“The last project I want to highlight is one that we're calling the arsenal plane, which takes one of our oldest aircraft platforms and turns it into a flying launchpad for all sorts of different conventional payloads,” Carter said on February 2. “In practice, the arsenal plane will function as a very large airborne magazine, networked to fifth generation aircraft that act as forward sensor and targeting nodes, essentially combining different systems already in our inventory to create whole new capabilities,” he explained.

From Carter’s statement, we know that the aircraft will not be new—in fact it will be among the oldest. Given that the mission is to carry as much ordnance as possible, the project will likely require a large aircraft—one that can carry a huge payload while still keeping up with a flight of jet fighters. That means an aircraft that can maintain high subsonic speeds and has the wiring to carry weapons.

The two most likely candidates for the arsenal plane are either the Rockwell International B-1B Lancer or the Boeing B-52—both of which carry a huge payload and can maintain high subsonic speeds for a prolonged period. Boeing—which now owns what used to be Rockwell International’s aerospace business—pitched a concept called the B-1R more than ten years ago to convert the Lancer into an arsenal ship. However, given Carter’s description, the B-52 is the more likely candidate. As he said, the arsenal plane will be based on the one of the oldest planes in the inventory.

It’s a smart concept—it kills two birds with one stone. First, it solves a fundamental problem with stealth aircraft like the Lockheed Martin F-22 and F-35, which is that low observable aircraft tend to have relatively tiny payloads because of the need to carry weapons and fuel internally. Secondly, it solves the major problem that afflicts long-range stand-off weapons—which is targeting.

In the case of the arsenal plane, a stealth aircraft could fly deep inside a hostile threat ring and provide real time targeting. The data would be relayed back to the arsenal plane via a high-speed datalink like TTNT, which would then be able to launch the weapon. Meanwhile, the stealth aircraft—which would be orbiting over the target zone—could provide real time updates and battle damage assessments. That would allow standoff weapons like cruise missiles to engage moving targets, which have been a traditional limitation of such weapons.

The idea is not new. The U.S. Navy floated a very similar concept using F-35C Joint Strike Fighters as spotters while Boeing F/A-18E/F Super Hornets would act as the arsenal. The keys to the concept are robust data networks and network-enabled standoff weapons like the JASSM-ER. Indeed, with Carter’s recent directive that the Unmanned Carrier Launched Airborne Surveillance and Strike (UCLASS) be repurposed into a aerial refueling tanker, the Navy will likely rely on that concept going forward into the next several decades using the Naval Integrated Fire Control Counter Air battle network as its backbone.