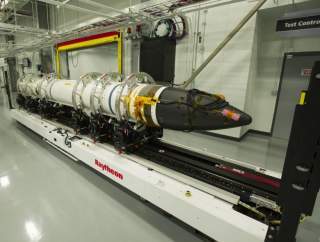 The Missile Defense Agency and Raytheon plan to fire a new SM-3 missile variant into space to destroy an approaching enemy missile target - as a way to develop a new interceptor better able to detect and destroy ballistic missile threats approaching the earth’s atmosphere from space.

The new missile, called the SM-3IIA, is slated to fire from a land-based missile defense site planned by the Pentagon for Poland by 2018, a Missile Defense Agency spokesman, told Scout Warrior in a statement.

The planned Poland deployment is a key part of what the Pentagon calls the Aegis Ashore program, an effort to leverage the ship-based Aegis Radar for land-fired missile defense technology. As of last year, Aegis Ashore locations are already operational in Romania as part of the Obama administration’s European Phased Adaptive Approach program.

“This is an extended capability of what we have for the SM-3 1B.  Because of the larger missile this is a 21-inch air frame. we have a larger area of defended area coverage. we've also brought in some capability advancements into our kinetic warhead so now we have a higher sensitivity - so that is just better seeker,” Amy Cohen, Raytheon SM-3 Director, told Scout Warrior in an interview.

The SM-3IIA is still finishing up development and is slated for flight test in the second half of this year. The MDA and Raytheon test will assess the kinetic warhead and missile seeker in a space environment, Cohen explained.

An improved seeker can better see approaching targets from longer distances compared to the SM-3 1B, she added.

“The first intercept flight test is planned for second half of this year. We will be engaging against a medium range ballistic missile - the next flight test we have will get us to the point where we have the trajectory very solid that we are there to support EPAA phase III in Poland,” Cohen added.

In December of last year, Raytheon received a $543 million SM-3IIA production contract to build the missiles. Some of these missiles will be sent to Poland for the Aegis Ashore site planned for 2018, officials said.

Meanwhile, Raytheon and the MDA are also upgrading the existing SM-3IB missile with improved software such that it can better detect and destroy new threats, Kenyon Hiser, Raytheon’s SM-3 Block IIA program manager.