The Pentagon's Emergency Plan If the F-35 Doesn't Work 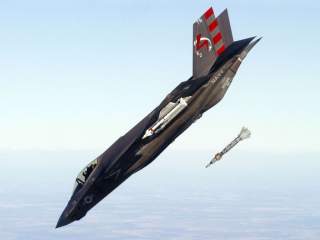 The United States government has sunk billions into the Lockheed Martin F-35 Joint Strike Fighter. The program is set to cost taxpayers almost $400 billion to develop and build 2,443 of the stealthy new jets for the U.S. Air Force, Navy and Marine Corps.

To ensure that the program is all but unkillable, Lockheed spread the work on the program around the country and around the globe. Indeed, the program brags about its economic impact. “In the U.S. alone, the F-35 program supports direct and indirect jobs for 129,000 people and provides work for more than 1,200 suppliers in 45 states and Puerto Rico,” reads Lockheed’s F-35 website. “The F-35 does more than just elevate international security—it also strengthens the global economy by providing jobs, industrial partnerships and technology benefits to people and companies across the world. In the years ahead, the F-35 program will create more jobs than any other Department of Defense initiative this decade.”

Moreover, the F-35 program is producing industrial benefits in Australia, Canada, Denmark, Italy, the Netherlands, Norway, Turkey and the United Kingdom—which are the original partners. Additionally, the F-35 creates jobs in Israel, Japan and the Republic of Korea—which have also purchased the new stealth fighter. Indeed, while major defense procurement programs are mostly viewed in national security terms, these programs are similar to entitlement programs—no member of Congress would ever vote to kill jobs in their district. That’s what contractors and the Pentagon count on.

But what would happen if an outsider—one that has no bridges to burn, no stakeholders to appease—came to power? In that case—in the unlikely scenario where new leadership in Washington decided that enough was enough—the U.S. government would no longer tolerate the years of delays, technical failures, continuing glitches and lowered expectation—what would happen? The answer is that there are alternatives.

For the U.S. Air Force, the most obvious alternative would be to resurrect the Lockheed Martin F-22 Raptor. While reconstituting the production line would be expensive and difficult, it could be done. The U.S. Air Force stored the tooling for the aircraft—and while that storage process has problems, it’s not an insurmountable challenge. The more difficult problem will be the subcomponents. Indeed, most of the Raptor’s antiquated computer hardware hasn’t been built in years. However, a fleet of four hundred new F-22 Raptors would give the service a force capable of knocking down the door for follow-on conventional fighters such as upgraded or even new Lockheed F-16s or Boeing F-15E Strike Eagles.

The Navy—which has always been lukewarm toward the F-35C—could continue to buy advanced derivatives of the Boeing F/A-18E/F Super Hornet. In fact, Boeing has already pitched such an aircraft. Longer term, the service could restart a long-range unmanned stealth bomber program. A stealthy long-range unmanned strike aircraft is probably what the service needs to defeat the emerging anti-access/area-denial challenge in the Western Pacific.

U.S. allies who have bought the F-35 could either buy an aircraft from Eurofighter, Dassault, Boeing F/A-18E/F, Saab’s Gripen or even upgraded F-16s. Some allies may eventually be able to develop their own stealth aircraft if they choose. The bottom line is that while plans would have to change—it’s not the end of the world. Militaries have to adapt to political conditions of the day. That being said, given the sunk costs, the F-35 isn’t going anywhere.