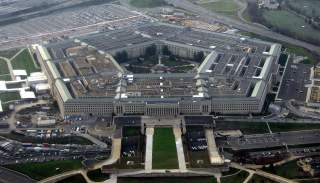 In one of his final acts as Secretary of Defense, Ashton Carter is implementing plans to integrate the Strategic Capabilities Office (SCO) permanently into the Pentagon bureaucracy. Earlier this week, Carter signed a memo that would turn the fledgling office into a permanent structure.

In many ways, the SCO is central to Carter’s goal of fostering innovation within the Pentagon’s ponderous and bloated procurement processes—which often deliver capabilities late and over budget. “The SCO, so-called, is one of the ways that—but only one, but a very important one—that we're trying to continue to be the most technologically innovative military in the world,” Carter told reporters at Joint Base San Antonio-Randolph in Texas earlier today. “That's important. We've always had the technological edge. I already said our people is what make our military the greatest, and next to the people is our technology.”

Under President Barack Obama’s final budget, the Pentagon is making investments to retain its technological edge and recapture its ability to fight against near-peer great power threats. “We're making big investments. We have made those in the budget that is before Congress now and that we hope finally gets passed,” Carter said. “And we're preparing a budget for fiscal year '18, which we'll obviously hand off to the new team there. But again, that has that same emphasis.”

The Pentagon’s innovation drive comes at a critical moment as Russia and China continue to expand and modernize their forces while the United States has been distracted fighting counter-insurgency campaigns for the better part of two decades. Indeed, in recent months the Russians—particularly in Syria—have demonstrated advanced capabilities that have caught the Pentagon off-guard.  “We spent 15 years of necessity very focused from the point of view of our investments and operations on counter-insurgency in Iraq and Afghanistan. We still need to be able to do that and we need to continue to remember everything we've learned,” Carter said. “But we now are preparing for a wider spectrum of conflict, including higher-end opponents that are more technologically challenging.”

But while the United States will have to develop advanced new technologies to maintain its lead over Russia and China, new systems take a long time to incubate. Thus, an organization such as the SCO is important because it finds new ways to use existing weaponry to counter new threats. “Technology's an important part of that, so that's part of our investment portfolio,” Carter said. “The SCO is particularly focused on taking weapons systems that we now have. It has been one of the things—places where it's been more creative and giving them new missions.”

One example where the SCO’s efforts are starting to bear fruit is the Navy’s Raytheon Standard SM-6 surface-to-missile, which has been adapted for new missions. “For example, it took an anti-air missile—excellent missile—of the Navy's and figured out how to make it also capable of attacking ships. Very sophisticated, long-range, fast, very lethal weapon. And we had bought it for one reason. They found a way to use it in another way as well, sort of doubling the value of our investment,” Carter said. “That's the kind of thing we've gotten out of the SCO. Very creative group of people that work with and for all the services and help them figure out how to be even more innovative with the programs they have.”

That’s one of the reasons that no matter whoever succeeds Carter when the Donald Trump takes office on Jan. 20, 2017, the Pentagon should probably keep the SCO office running. Meanwhile, the Pentagon is well prepared for the transition to the new administration. “We are ready to welcome President-elect Trump's transition team to the Defense Department,” Carter said. “I'm committed to an orderly transition to our new commander-in-chief. We have prepared for their arrival. We will welcome them warmly. We will help them to hit the road running. They have not arrived yet in the Pentagon. They'll do that when they're ready. But we're ready for them.”