The Pentagon's Third Offset: Just a Smoke Screen for a Shrinking US Military? 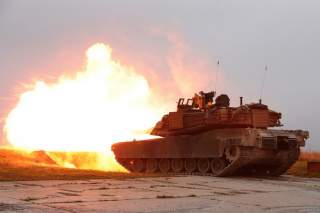 When he became Secretary of Defense, Ashton Carter found himself with a seemingly insoluble dilemma. He needed simultaneously to maintain high readiness of existing forces that are in continuous use around the world fighting Islamic jihadists and deterring state adversaries while also preparing for future conflicts involving near-peer nation states. These new competitors have closed the gap with the U.S. military in a number of key technology areas and, in some cases such as electronic warfare, cyber and long-range missiles, has exceeded our own capabilities. And he had to achieve both these objectives with a defense budget that was suffering under a $1 trillion cut over ten years due to the Budget Control Act. In order to balance the books, so to speak, Secretary Carter and senior Pentagon leaders came up with the idea of pursuing a Third Offset Strategy.

The notion of pursuing a Third Offset Strategy is built on the assertion made in a speech by Deputy Secretary of Defense Robert Work that since the end of World War Two the United States has twice undertaken clearly defined strategies of investment in new technologies and the creation of appropriate forces and operational concepts to counter a perceived narrowing of the gap between U.S. military capabilities and those of our principal adversaries. The first offset was President Eisenhower’s New Look Strategy which proposed a large-scale expansion in the number of U.S. nuclear weapons and their roles in military operations to deter the growing threat of the massive and mechanized Red Army. Reliance on nuclear weapons for deterrence had the additional advantage of allowing the Pentagon to reduce the overall size of the military as well as the costs of national defense.

The second offset was required when the Soviet Union attained nuclear parity with the United States, essentially undermining the deterrent value of a U.S. nuclear response to Russian conventional aggression. Since the Red Army still maintained a massive quantitative advantage in Europe and the Far East in comparison to the United States and its allies, a new way had to be found to prevent Moscow from initiating hostilities.  The second offset strategy relied on several key technologies – stealth, precision guidance for aircraft and weapons and information networks – and a new strategy of deep attack to counter the threat from massed Soviet mechanized forces. The utility of this second offset strategy was demonstrated in two conflicts in 1991 and 2003. Happily, this strategy also had the virtue of maintaining U.S. military superiority in an era of declining defense budgets and shrinking forces that began in the mid-1980s and accelerated after the collapse of the Soviet Union.

The third offset strategy hopes to accomplish two objectives. First, by investing in groundbreaking technologies in such areas as undersea systems, hypersonics, electronic warfare, big data analytics, advanced materials, 3D printing, energy and propulsion, robotics, autonomy, man-machine interfaces and advanced sensing and computing, the Pentagon hopes to create new military capabilities that will counter competitors’ advances in precision weapons, long-range missiles and electronic warfare. Second, by relying more heavily on technologies developed in commercial industry and, even more important, on the practices of cutting-edge IT companies in the areas of innovation, experimentation and rapid development and deployment, DoD believes it will learn the ingredients to Silicon Valley’s secret sauce for rapidly developing and bringing to market new products and successively lower prices. To that end, Secretary Carter created the Defense Innovation Initiative and the Strategic Capabilities Office and set up consulates in Silicon Valley and Boston under the new Defense Innovation Unit-Experimental, or DIUx.

The Secretary admits that he is not sure what will come of this focus on new technologies and the outreach to non-traditional defense suppliers. The first two offsets were much more focused with respect to the problems that were being addressed, the technologies in which they were investing and the parts of the private sector they were engaging. The Third Offset Strategy resembles a high tech version of the casting call for the tryouts for America’s Got Talent; even the producers have no idea who will show up or how they will perform.

Like the other offset strategies, this one has a somewhat hidden agenda: to obfuscate the fact that the U.S. is not spending enough on defense and that the Obama Administration is continuing with its plan to shrink the size of the armed forces in order to free up money for readiness and modernization. The hope is that the Third Offset Strategy will do for the military what is already being done for parking garages, fast food restaurants and retail stores: reduce the need for human beings.

There is room in the military for improved automation and the use of robots. For example, the new Ford-class aircraft carrier will be able to launch substantially more aircraft sorties each day with a crew that is 25 percent smaller. But there are also practical limits to how small a military with global responsibilities can become and still do its job. The Pentagon found this out in 2004 when it had to increase substantially the size of the Active Component of the Army and rely more heavily on the National Guard and Reserve to cope with the situations in Iraq and Afghanistan.

The bigger danger is that DoD will become enamored of its new offset strategy and cut current programs and forces in anticipation of great results emerging from its investments in automation, big data and robots. There is a long history of the Pentagon and the White House promising huge leaps forward in military capabilities for future systems that are just PowerPoint slides, but cutting real capabilities now.