The Philippines' Biggest South China Sea Problem: It Has Almost No Navy 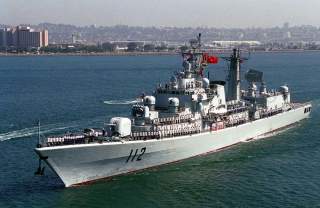 The Philippine Navy is too small for its country. The archipelago nation sits between two major strategic chokepoints in the Western Pacific, and China is muscling ever more into the South China Sea and into Manila’s exclusive economic zone.

But the Philippines can do little, as it has one of the weakest, rustiest navies in the region.

That is slowly changing — very slowly. The Philippines is not capable of building a navy to stand up to China in a war. But it is forming a naval force which can fight, and that might be enough to deter Chinese intrusions to a limited extent.

Limited is not an understatement.

The biggest share of the Philippines’ naval combat power now rests in three hand-me-down U.S. Coast Guard Hamilton-class cutters with decades of service in hard conditions. Yes, this is actually an improvement.

On July 21, the Philippines officially took possession and commissioned its third ex-Hamilton class. Now designated as a frigate, the ship is the former USCGC Boutwell, renamed the BRP Andres Bonifacio after the Filipino revolutionary leader.

Andres Bonifacio just had her 49th birthday, having first launched in June 1967. She’s hunted drug smugglers, guarded oil terminals during the 2003 invasion of Iraq, and rescued 519 people from the burning Dutch cruise ship MS Prinsendam in poor weather off Alaska in 1980.

She has a respectable range of 9,600 nautical miles at 15 knots. However, the vessel hasn’t had an upgrade since the early 1990s, and her anti-submarine countermeasures were removed after the Cold War.

For most practical purposes, this ancient vessel belongs in a museum. “They say she’s an old girl. She takes a lot of maintenance,” Chief Petty Officer Ryan Ross told Military.com in 2015. “I work down in the engine room and that’s what it takes to keep her going.”

Currently the ship formerly known as Boutwell is at the U.S. naval base in Alameda. She has a fresh coat of paint, then several months of training and an October journey to the Philippines to look forward to.

After that, Andres Bonifacio will face down China.

It’s happening during a tense time. The South China Sea is one of the world’s flashpoints, and China has turned isolated reefs into military bases well within Manila’s exclusive economic zone.

On July 12, a tribunal at the Permanent Court of Arbitration in the Hague threw out China’s claims of having sovereign rights to the disputed territory, and cited Beijing for causing “irreparable harm” to the environment and interfering with Philippine rights.

China isn’t backing down. What happens next is uncertain for the Philippines and Andres Bonifacio. The country’s new president, Rodrigo Duterte, is under intense political pressure at home not to surrender a nautical inch.

Manila has two other 115-meter-long ex-Hamiltons, the BRP Ramon Alcarez(formerly the USCGC Dallas) and the BRP Gregorio del Pilar (formerly the USCGC Hamilton). Beside these three ships, the Philippines’ defense relies on a handful of similarly antique corvettes, coastal patrol boats and fast attack vessels.

For armament, the Andres Bonifacio has a single 76-millimeter OTO Melara cannon mounted near her bow. If the handover follows a similar pattern with her predecessors, the Philippine Navy will swap out the ship’s two 25-millimeter Mk-38 Bushmaster autocannons for upgraded Mk-38 Mark 2s.

Each newer autocannon includes a laser rangefinder, a thermal imager and other improvements designed to improve their ammunition belt feeders, improving accuracy. We can expect her to receive several .50-caliber machine guns. She has a flight deck, and it’s likely Manila will add an AgustaWestland AW109 helicopter for scouting duties, like her sisters.

But the Andres Bonifacio will lose ones of her key defenses. Before the handover of the other two ships of her class, the U.S. Navy removed their Phalanx miniguns, designed to shoot down aircraft and incoming missiles.

The Coast Guard also took out their radars and navigation systems, but the Philippines replaced these after commissioning.

The frigates have no anti-ship missiles, rendering them defenseless against the far more numerous Chinese warships that do have them. In a war, China could sink the poor frigates from miles away without seeing a shot in return.

In any case, the former U.S. ships are well past their prime, meaning lengthier periods spent in port fixing maintenance issues which will inevitably crop up.

So why field them at all? Manila could have bought more modern, capable warships available on the international market.

There are several good reasons.

The Philippines’ defense budget is small, and the United States handed the cutters down through the Excess Defense Articles program, making them practically free. (It would cost the U.S. Coast Guard more to scrap the ships than give them away.) The Philippines only pays for the upgrades.

Another reason — when Manila first bought the frigates, they immediately became the biggest, toughest ships in the Philippine Navy. This makes them a relative improvement. Furthermore, Manila needs every vessel it can get, and Chinese adventurism in the South China Sea doesn’t always come armed with long-range, ship-killing missiles.

Certainly, China sends warships into the region. But Beijing also relies on a growing, unofficial “maritime militia” of fishing vessels to block Philippine ships from approaching the constellation of Chinese-controlled rocks and reefs inside Manila’s economic zone.

A third ex-American rust bucket is a significant boost — and intimidating enough when heading on an intercept course toward a creaky, fishing boat that is covertly acting in the service of China’s territorial ambitions.

The frigates are worth it. Just don’t expect them to survive in a war.