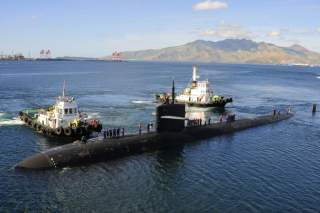 The Philippines is seeking to procure three submarines a senior Philippines naval official announced on Wednesday.

According to numerous local media outlets, Caesar Taccad, the vice commander of the Philippines Navy, said that the navy has begun laying the decade-long groundwork necessary to build an effective submarine fleet.

“Submarines take a lot of gestation period,” Taccad was quoted as saying. “The rule of thumb in the development of support facilities, the people and technology of operating such a force is 10 years. Now when should we start? We can start now so we can [acquire them] 10 years from now.”

The rear admiral said that the country was ultimately hoping to acquire at least three submarines but that financial constraints might limit them to only two vessels. “If you cannot afford three, get two just like we're getting two frigates and two strategic sealift vessels so they can replace each other during maintenance. If you only procure one and continuously use it, it will only last for 5 years,” he explained.

Amid ongoing disputes with China over overlapping claims in the South China Sea, the Philippines has spent PHP41 billion ($925 million) on modernizing its military platforms since President Benigno Aquino took office in 2010. Still one of the weakest military powers in the region, last month President Aquino pledged to devote an additional PHP91 billion ($2.01 billion) to modernizing the country’s defense by 2017.

Much of this, including the submarines, will go to procuring platforms to counter China in the disputed waters. “We need submarines for deterrence,” Taccad explained at the press conference.

It is not the only one, as states throughout Asia have been looking towards submarines to counter China’s growing military might. Japan has long fielded a capable undersea fleet, and is in the middle of procuring ten Soryu-class subs. It also seems increasingly likely that Australia will purchase its own Soryu-class subs from Tokyo. South Korea has also long maintained an undersea fleet, which it is rapdily expanding, and Taiwan is seeking to build new subs indigenously.

Even before the Philippines’ decision, Southeast Asian waters have become increasingly crowded with various submarine fleets over the years. All three nations that sit atop the Malacca Strait-- Singapore, Malaysia, and Indonesia-- operate submarines and, perhaps most notably, at least with regards to China, Vietnam is spending $2.6 billion to acquire six Kilo-class submarines from Russia.

No word yet on which country the Philippines might turn to when it comes time to purchase its own undersea fleet.