The Pivot’s Legacy: Locking in U.S. Presence and Building Effective Institutions in Asia 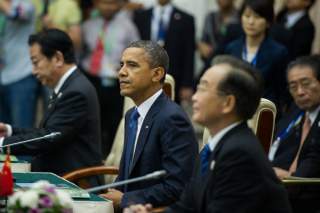 U.S. Secretary of State John Kerry’s trip to Asia this week for annual regional diplomatic meetings highlights a core tenet of the Obama administration’s strategic pivot to the Asia-Pacific region: engaging and making better use of the region’s multilateral institutions. Formerly known more for funny shirts and not terribly funny skits, Asia’s multilateral architecture plays an important role in the region and it is vital that the United States has a seat at the table. Over the past seven years, the U.S. government has taken a number of steps to elevate its commitment to these bodies – joining the East Asia Summit, appointing a resident Ambassador to the Association of Southeast Asian Nations (ASEAN), and forming new institutions like the Lower Mekong Initiative.

At the most basic level, participation in Asia’s multilateral bodies provides incentives for U.S. officials to “show up” on a regular basis to a region that highly values the face time associated with personal diplomacy. The collection of summit, ministerial, senior official, and expert meetings held throughout the year provides a predictable rhythm for regional diplomacy which has largely been absent in Asia, unlike Europe with its more robust institutions. While membership is not a guarantee of attendance (President Obama missed the 2013 East Asia Summit due to the U.S. federal government shut down), it is noteworthy that Secretary Kerry is making the trip this week notwithstanding the focus and attention to the nuclear deal with Iran, which has sidetracked other U.S. visits to the region.

There are generally two sets of benefits that these forums provide: one, unique opportunities for dialogue; and two, platforms to channel collective action on shared concerns. On the former, institutions like the East Asia Summit and ASEAN Regional Forum have become important venues to discuss significant security concerns, from North Korea to aggressive actions in the South China Sea, and reinforce the system of rules and responsibilities that undergird regional peace and prosperity. However, some members, like China and its partners or proxies, seek to stifle discussion, prevent collective problem solving, or otherwise obscure the transparency that such dialogues by their nature are intended to facilitate. Sometimes these tactics are strikingly coarse: three years ago in Cambodia, Philippines Foreign Secretary Del Rosario’s microphone mysteriously failed when he raised the South China Sea in his remarks during an ASEAN ministerial meeting. The implications were as apparent as they were unacceptable, and it is clear the majority of members favor open dialogue.

Often overlooked, the forums also provide venues for bilateral relationship building through informal discussions. In many ways, the visit to the United States this summer by Vietnam’s Communist Party General Secretary Nguyen Phú Trọng was paved by cooperation in multilateral forums. During its ASEAN chair year in 2010, Vietnam played a pivotal role bringing the United States into the East Asia Summit, which set the context for a new era of U.S.-Vietnam regional cooperation. Moreover, multilateral forums like ASEAN and the United Nations played important roles in the historic warming of relations between the United States and Myanmar in the absence of formal diplomatic ties.

The results of the difficult work in leveraging these bodies towards tangible cooperation have been mixed, stymied by conflicting national priorities and a lack of institutional capacity. As few officials want to show up empty-handed to these meetings, preparations in member capitals drive a self-reinforcing cycle for creating new regional initiatives and “deliverables” that not only justify senior participation, but also imbue these bodies with greater purpose and utility, from disaster response coordination to English-language training programs. The outstanding challenge is providing greater policy coherence and practical depth to the patchwork of programs to date.

Recognizing that this December marks the 10-year anniversary of the founding of the East Asia Summit, there are steps member countries can take to strengthen Asia’s multilateral architecture:

The region’s forums must remain open to honest discussions on pressing regional issues, including sensitive topics around territorial disputes and cyber-security, which some countries would prefer not air in multilateral forums. Transparency and clear signaling of national interests increase mutual understanding, isolate bad behavior, and ultimately can reduce the risk of conflict from misunderstanding or miscalculation. Given acute energy and environmental concerns throughout Asia, bodies like the East Asia Summit could serve as another platform to encourage ambitious national commitments for the UN Paris Talks on Climate Change and align international support to meet them, like the U.S.-Asia Pacific Comprehensive Energy Partnership.

Regional institutions are like muscles and get stronger with use. As a first step, the East Asia Summit formation of countries should meet more regularly to share views on regional concerns. Rather than relying exclusively on infrequent meetings of senior officials from capitals, EAS member permanent representatives to ASEAN based in Jakarta can meet for regular exchanges, akin to NATO’s North Atlantic Council meetings. Second, countries should place institutional demands on the initiatives that have been launched to date, like truly utilizing the ASEAN Coordinating Centre for Humanitarian Assistance on disaster management when natural disasters strike.

To meet these greater demands, the supporting institutional bureaucracies must be further strengthened. The East Asia Summit has ASEAN as its driving force, which has helped the institution avoid great power jockeying for procedural control. However, ASEAN’s bureaucracy is limited, with each member contributing the same amount in terms of financial and personnel resources, so that larger economies like Singapore and Indonesia invest the same as Laos. ASEAN should call on a more distributive burden-sharing for the East Asia Summit, which includes support from non-ASEAN members.

Brian Andrews is a Principal with The Asia Group.  He previously served in the U.S. government on Asia policy, including as Advisor for the East Asia Summit on the National Security Council.