The Problem with America's Nuclear Weapons: They're Really Old 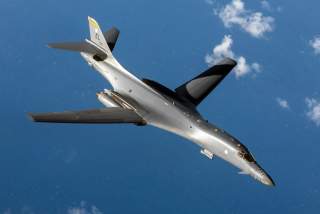 Donald Trump recently reminded the world that his “first order as president was to renovate and modernize our nuclear arsenal.” And he tweeted: “Hopefully we will never have to use this power, but there will never be a time that we are not the most powerful nation in the world!”

The president’s hot rhetoric, alas, is about to collide with the cold fiscal and political realities of nuclear weapons modernization.

The U.S. Air Force this week took a major step forward when it selected Boeing and Northrop Grumman to begin designing a nuclear-armed intercontinental ballistic missile to replace the 50-year-old Minuteman.

The August 21 announcement did not come as a surprise. The Air Force had been steadfast in its plans to start acquiring the next-generation ICBM, known as the ground-based strategic deterrent program. It solicited proposals last summer and bids were due in October. Each of the winners received a $349 million award for the so-called “technology maturation and risk reduction” phase of the project. Boeing and Northrop beat out Lockheed Martin in the high-stakes competition.

The contractors, over the next three years, will map out their concepts for how to build, deploy and maintain a fleet of more than 600 missiles. The ground-based strategic deterrent, or GBSD, is the land-based leg of the nation’s nuclear triad. Along with the Navy’s nuclear missile submarines and the Air Force’s nuclear-armed stealth bombers, they exist for the sole purpose of deterring other countries from launching a thermonuclear war.

Congress this fall will be digging deeper into the Pentagon’s planned modernization of the triad and expects to receive an updated “nuclear posture review” from the Defense Department. While a debate is expected on the geopolitical realities that compel the United States to continue to fund these programs, the projected $400 billion price tag for the  modernization looms large.

The GBSD program alone is projected to cost up to $80 billion for the missiles and ground infrastructure. Critics have suggested the Air Force should save the money and continue to upgrade the aging Minuteman III inventory. Others have floated the idea of completely doing away with the land-based leg of the triad, arguing that the Navy’s new Columbia-class submarines and the Air Force’s B-2 and B-21 stealth bombers will provide sufficient deterrence.

Daunting fiscal and political hurdles should be a concern for the Air Force and for the contractors in this program, noted defense industry analyst Byron Callan of Capital Alpha Partners. “We remain guarded on prospects for GBSD,” he wrote in a note to investors. The Pentagon simply will not have enough money to pay for everything it wants over the next decade. “There’s the nuclear triad, Army modernization, Navy expansion, new space systems, the F-35 joint strike fighter,” he argued. “Funding will be constrained.”

Defense Secretary Jim Mattis has said repeatedly the Pentagon will need a major budget boost to pay for long-term modernization needs. But it is hard to envision how that will happen in an era of deep partisan divisions and no consensus on national security funding priorities.

The GBSD today is the most politically vulnerable of the three legs. The Navy’s Columbia-class submarine program seems “quite safe,” said Callan. The Air Force’s super-secret B-21 bomber has dual conventional and nuclear roles, and its development is said to be progressing. Meanwhile, “we continue to wonder about the logic and cost of replacing land-based ICBMs,” he said. Some fundamental questions have yet to be asked: “What's the incremental deterrent value of a land-based ICBM force? Why not use maneuvering hypersonic weapons? And who is being deterred?” Also, is the GBSD the way to deter Russia in the 2020s and how much does this matter to China?

Kingston Reif, a nuclear weapons analyst at the Arms Control Association, said the GBSD program is “ripe for further scrutiny.” A debate is expected on Capitol Hill on “whether GBSD is the most cost-effective way to replace the Minuteman III system,” Reif said. “The Air Force has yet to make a compelling case, in my view, as to why another Minuteman III life extension isn't a viable option in the near term.”

The Pentagon has rejected these arguments and intends to forcefully defend investments in a new land-based leg of the triad.

“Yes, it’s a lot of money. But it is well worth it given world conditions,” former Air Force Secretary Deborah James told RealClearDefense.

James, who served during the Obama administration, was one of the architects of the GBSD program and one of its most ardent advocates. “I do recognize that there are different viewpoints,” she said. But the “preponderant view” now is that the global security environment warrants these investments.

“Russia is building up its nuclear arsenal. North Korea is posing threats that 15 to 20 years ago we didn’t even think about,” said James. “This is probably no time to radically change the triad approach that has served us well for over 70 years.” And she noted that the cost — about 4 to 5 percent of the defense budget — should not be cause for alarm.

“The last time we developed ICBM technology was more than 40 years ago,” she said. “A lot has changed and we are using very old data.”

Air Force Chief of Staff Gen. David Goldfein said the ICBM modernization is not up for debate. "As others have stated, the only thing more expensive than deterrence is fighting a war. The Minuteman III is 45 years old. It is time to upgrade."

Nuclear weapons experts who have studied the history of strategic deterrence predict the triad will survive whatever political storms lie ahead. No U.S. administration wants to be the one blamed for weakening the nation’s posture.

What makes the triad hard to break is that each leg is supposed to be independent. The Pentagon designed it that way so any of the three legs can inflict unacceptable damage. “Bombers are more flexible. Submarines are viewed as the last resort. But the ICBMs are viewed as the most stabilizing leg,” said an industry official who spoke on condition of anonymity.

The Minuteman III leg features 450 hardened silos that are connected to the president through redundant and assured communications, he noted. “It would require a massive attack to eliminate the ICBMs. It poses an adversary an insurmountable obstacle,” the official said. “If we did not have the ICBMs our nuclear force would resemble France, with just submarines and bombers. ICBMs -- because of the sheer number of targets -- play a critical role in stabilizing the nuclear balance. And you need varied means of attack so adversaries don’t focus on just one thing.”