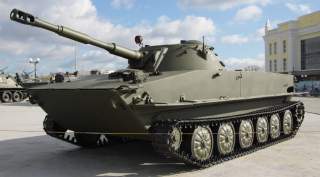 Abruptly, one of four approaching PT-76 detonated an anti-personnel mine, revealing the silhouetted tanks in the explosion’s afterglow. The night erupted as the American and Vietnamese tanks exchanged armor-piercing shells. One Patton destroyed a PT-76 on its second shot.

Meanwhile, company commander Capt. John Stovall was perched on the turret of the command tank, illuminated by its Xenon spotlight, when a 76-millimeter round struck the vehicle, blasting Stovall and the tank commander off the turret and killing two of the crew. Relief tank crews quickly took their place and brought the Patton back into action.

The American firebase called in 81-millimeter mortar strikes and AC-47 gunships, while the M48 expended all of their anti-tank shells and switched to high explosives. Finally, a second platoon of Pattons relieved the base, causing the NVA to withdraw. The following morning, U.S. troops found two destroyed PT-76s and a BTR-50PK on the perimeter of the camp. This marked the only engagement between U.S. and North Vietnamese tanks during the Vietnam War.

Ben Het would be revisited by the North Vietnamese amphibious tanks three years later in June 1972 — but this time the American forces exacted a revenge both deadly and historic.

Just a month before, an operational testing unit of UH-1B helicopters equipped with new BGM-71 TOW anti-tank missiles had arrived in Vietnam. These swooped to the aid of the camp, where they fired off their wire-guided missiles from their three-tube XM26 launchers, destroying three PT-76s and driving the rest away.

The tank hunting Hueys destroyed five more PT-76s around Kontum the following week. The early TOW missiles could penetrate 430 millimeters of armor, so the 25 millimeters of steel on a PT-76's turret front did not offer much protection.

Thus, the PT-76 won the dubious distinction of being one of the first tanks destroyed by helicopter-fired anti-tank missiles — though, ironically, much lighter armament would likely have sufficed to knock one out.

As the U.S. withdrew from Vietnam, the North Vietnamese tankers made greater use of heavier T-54s, Type 59 and captured M41 Bulldog tanks alongside the PT-76 in pitched battles such as Loc Ninh and An Loc in 1972. These armored units spearheaded the offensive that led to the fall of Saigon in 1975.

Still today, the Vietnamese military maintains hundreds of upgraded PT-76s in its inventory, as well as Chinese-made Type 63s.