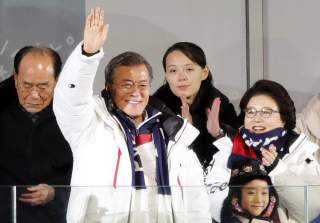 Consider the global chessboard from Pyongyang’s point of view. As the year 2018 began, the North Korean state was on a knife-edge: though it had just achieved momentous advances, it also faced potentially disastrous setbacks.

Over the course of 2017, Pyongyang celebrated not only another atomic test, but it also celebrated a thermonuclear test—the makings of a hydrogen bomb. It also successfully launched an ICBM that would put the entire U.S. homeland within range, according to Kim Jong-un.

Indeed, in his annual New Year speech earlier this year, Kim declared that the era of testing was largely complete, and that North Korea would be moving forward with mass production of missiles and nukes. Thus, a government commanding a GDP not nearly as large as (say) Baltimore’s would soon be able to threaten Washington, DC with nuclear annihilation. By the strategic calculus that animates the Kim family regime, that qualified as an imminent historic triumph.

But that prospective triumph remains in jeopardy—because North Korea’s drive for global nuclear reach has been met with an international pressure campaign that might undo these gains, and even threaten the stability of the North Korean state.

Each round of North Korean nuclear tests has elicited increasingly severe sanctions resolutions from the UN Security Council, and has seemingly expanded and solidified the international coalition intent on penalizing Pyongyang for its violations. Even Beijing—the Kim dynasty’s longtime financial backer and de facto international defense lawyer—appears to be wavering in its support. Since the extraordinarily distorted North Korean economy is uniquely vulnerable to international economic sanctions, a sustained “maximum pressure” campaign worthy of the name could eventually paralyze the DPRK economy as well as undercut the war efforts that eat up so much of North Korea’s material and financial resources.

To build upon its impressive 2017 breakthroughs, and simultaneously prevent its newly favorable strategic circumstances from being undermined, it is now imperative—from Pyongyang’s standpoint—that North Korea break apart the international-sanctions campaign that has risen to counter the DPRK’s nuclear ambitions.

And this is exactly what North Korea’s diplomatic pageantry at the Pyeongchang Winter Olympics these past few days was all about.

By sending the South a high-level DPRK delegation—nominally headed by nonagenarian titular head of state Kim Yong-nam, but most crucially including the Royal Sister, Kim Yo-jong—Pyongyang is gambling that it can mastermind a diplomatic process that will entice the Moon administration to break ranks on sanctions, punch a hole in the U.S.-ROK alliance, and grant the DPRK the “breathing space” it sorely needs to complete its nuke-missile quest, the necessary precondition before moving on to the next and perhaps even more consequential level of its contest against America and the ROK.

The notion that any South Korean government might serve as an accomplice—even an unwitting one—in Pyongyang’s long-term designs will probably strike most foreign readers as unfathomable and absurd. It is neither of these. For good or ill, North Korean decisionmakers have good reason to view South Korea as the soft underbelly of the international constellation of forces arrayed against it today.

History helps explain this seeming paradox. At the state level, the Korean Peninsula can be seen as the battleground in an ongoing, still-unfinished civil war. But a civil war of sorts also continues within South Korea, too, this one playing out in domestic politics. The political cleavage within South Korea is typically described as left/right or progressive/conservative, but it is much deeper than this: for it turns on views about the authenticity and legitimacy of the contending Korean governments.

On the Korean left, there are those who still regard the current South Korean constitutional democracy’s roots in postwar military dictatorship as an irredeemable “original sin”—and who likewise see the overarching role of Pax Americana in the ROK’s survival and fluorescence as, at very least, a cause for deep ambivalence. In these same circles, few if any may maintain an intellectual romance with the real existing North Korean state—but more than a few preserve a vestigial respect for the North as the “pure” Korea, uncompromised by globalism and unsullied by collaboration with historical enemies like Japan (or in the eyes of some: America).

As fate would have it, President Moon’s government is drawn squarely from South Korea’s progressive camp—which means that many of its principals come from the South’s “old New Left.” These circles carry a lot of historical baggage. Im Jong-seok, President Moon’s chief of staff, was a student organizer for South Korean dissident participation in Pyongyang’s 1989 “Festival of Youth and Students”—North Korea’s propaganda counter to Seoul’s 1988 Olympics. President Moon himself was long involved with “Minbyun,” an organization of progressive lawyers whose activities have included attempts to unmask the identities of North Korean defectors to the South.

Just to be clear: these forensics do not mean that the Moon government is tethered to the youthful views of some of its key players; a person’s worldview can, and typically does, evolve and mature with age and experience. Furthermore, President Moon has thus far demonstrated considerable pragmatism and practicality in his handling to of international affairs: not the least of these accomplishments being the burnishing of the U.S.-ROK alliance in the era of Donald Trump.

But this South Korean backstory helps explain why North Korean strategists may hope that they can tempt the current ROK government to stray away from the “maximum pressure” campaign, and manipulate it into helping enable the North’s own strategic objectives—just as North Korea attempted, with some success, to traduce two previous Presidencies in Seoul during the “Sunshine” era of 1998–2008.

The consequence Pyongyang assigns to its current winter offensive in the South is indicated by its provenance. The North’s proposal for participation in the Pyeongchang Olympics—and for North and South to strive anew “to improve relations between themselves and take measures for achieving a decisive breakthrough”—was issued not by some faceless spokesman for the Kim family regime. It was uttered by Dear Respected himself, and in his annual New Year address. In the North Korean system, no suggestion—or demand—can come with higher priority.

Add to this the remarkable gesture of sending the Royal Sister to the South, with a personal letter of invitation from Kim Jong-un to President Moon for a summit in Pyongyang, and we can see the immense import the Kim family regime places on this initiative.

This is the diplomatic equivalent of betting the house on South Korea’s compliance. The North has pulled out all the stops on this one. Pyongyang would never do such a thing if this were not deemed to serve an absolutely urgent purpose of state for the Kim family regime.

Exactly where things go from here, of course, remains unclear. South Korea had its own, entirely nonideological, reasons for inviting North Korean participation in the Winter Olympics: high among them, a desire to minimize the chances that the extortionist next door might pull one of its all too familiar scary-menace routines to disrupt the Pyeongchang spectacle.

Ordinary South Koreans, moreover, are decidedly more jaded about “inter-Korean dialogue” nowadays than in earlier years, and are correspondingly more wary about getting rolled (again). Then there is the matter of what we might call the “internationalization” of the North Korean nuclear crisis. The DPRK now faces a thicket of sanctions and strictures laid down not just by the United States, but by the UN Security Council; doing anything to violate or circumvent them could have serious international implications for the ROK. All in all, it is not clear how much wiggle room the Moon administration has in any prospective parlays with the North, even if it were inclined to give away the store.

That said: the first steps in the latest North-South dance are not entirely reassuring to those who fear a resumption of the all-take/no-give dynamic that characterized earlier episodes of North-South “engagement”.

As a goodwill gesture, the South (with Washington’s blessing) postponed the joint U.S.-ROK winter training exercises until after the Olympics; the North pocketed the concession without pretense of reciprocity. To accommodate North Korean athletes on an all-Korea team, the ROK acquiesced in a blue peninsular banner to represent the joint participants—thereby making South Korea the only host country in the history of the Olympics to sacrifice its own national flag at such ceremonies. To facilitate visits by North Korea’s high-level delegation, its athletes, and its cheering squads, Seoul interceded with the UN Security Council (and with Washington) to get special waivers for sanctioned regime officials, and sanctioned North Korean vessels: a practice that could set precedents and offer a foretaste of things to come. And already one hears rumors of grumbling within the Blue House that Seoul should not be subjected to interference from outside when it is deliberating on inter-Korean affairs. It is almost as if these things are considered to be a domestic matter. This is a point of view ominously consonant with North Korea’s propaganda refrain Uriminjokkiri (“among our own nationality”, as in self-determination), which is Pyongyang’s code-language for ending the U.S.-ROK military alliance and getting U.S. troops out of the peninsula.