The Rapid Buildup of China’s Military: The 'Intentions' Question 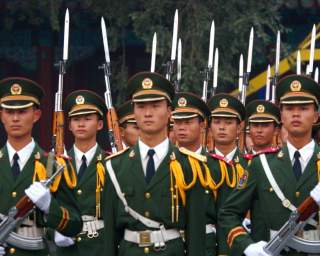 At the next presidential debate, the moderator asks: “How will you as President strategically respond to the rapid buildup and modernization of China’s military?” Each candidate’s answer will likely depend on the experts who have their ear – and what the candidates ultimately believe China’s intentions to be.

For example, experts like George Washington University’s Amitai Etzioni counsel accommodation – Etzioni sees China “as a regional, rather than global power” with “neither the capability nor evident desire to establish a new world order.”  In sharp counterpoint, the Hudson Institute’s Seth Cropsey asserts China’s “immediate goal is hegemony – to be the overlord of Asia” and insists on peace through countervailing strength.  Former Assistant Secretary of State and father of the “pivot to Asia” Kurt Campbell attempts to bridge this wide intentions gulf with the observation “it's not clear China itself knows really what it wants.”

This question of Chinese intentions is critical to determining appropriate White House policy – and whether any “pivot” to Asia is even necessary. If China seeks only to protect its homeland and guard the trading route its needs to prosper, the world has little to fear.  If, however, China seeks to seize territory and perhaps even drive the U.S. out of the Western Pacific as experts like US-China Commission member Dan Slane and University of Chicago’s John Mearsheimer insist, these decidedly bad intentions militate a far firmer presidential response.

China can certainly justify a strong military on homeland protection grounds after a Century of Humiliation involving aggression from a long list of foreign powers. There is also little question Trader China must morph from a continental-based power to a global naval force.

Indeed, as the world’s factory floor, China must continually feed its manufacturing facilities with massive quantities of natural resources from all over the world – copper from Chile, iron ore from Australia, oil from the Persian Gulf. China’s heavily export-dependent economy must also ship hundreds of billions of dollars of product to markets from Sierra Leone and Bolivia to Detroit, Frankfort, and Vancouver. As Alfred Mahan taught us long ago – and Mahanian scholars like Toshi Yoshihara and James Holmes of the U.S. Naval War College teach us today – naval power is the key to preserving one’s trading interests.

Having given China’s good intentions angel its due, there is also this insight from Dean Cheng of the Heritage Foundation: “China has a legitimate interest in preserving its trade routes and preserving access to its markets. The problem arises when China purchases systems that aren't really necessarily focused on defending things like sea lanes, but, instead, appear to be primarily focused on keeping the United States out of the Western Pacific.”  Dan Slane is even more blunt: “The Chinese are embracing their version of the Monroe Doctrine …to get us out of the Western Pacific so that they would have the ability to control that whole area of the world.”

To Professor Mearsheimer, this is perfectly rational: “The best situation for survival in the international system is to be a regional hegemon -- to be by far the most powerful state in your area of the world and make sure no distant great power has come into your region.”

As for China’s revanchist territorial ambitions, Beijing’s leaders themselves – along with People’s Liberation Army commanders – have made them abundantly clear.  While it is old news that China asserts its right to the “renegade province” of Taiwan, few outside of India realize China also claims India’s Arunachal Pradesh as “Southern Tibet.”

In what Cambridge University’s Stefan Halper describes as a “preposterous claim,” China also asserts sovereignty over 80% of the South China Sea while it similarly lays claim to Japan’s Senkaku Islands – along with a continental shelf that runs from the Chinese mainland right up to Japan’s 12-mile territorial limit.

It is precisely because of such possibly bad intentions that this year’s bumper crop of presidential candidates must think deeply about the “China issue” and respond accordingly.  They must do so not with meaningless slogans but rather with a set of appropriately nuanced policies worthy of the word “debate.”

Peter Navarro is a professor at the University of California-Irvine.  He is the author of Crouching Tiger: What China’s Militarism Means for the World (Prometheus Books) and director of the companion Crouching Tiger documentary film series.   www.crouchingtiger.net